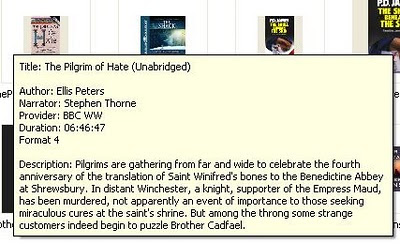 I have already read this Ellis Peters novel, but so long ago that my memory was very dim, and so I decided to listen to an audio copy.

It is of course one of the Brother Cadfael series, made famous particularly by Derek Jacobi's TV series.

The setting is the Benedictine Abbey at Shrewsbury, on the eve of the installation of the casket with St. Winifred's bones into the Abbey. The political setting is the struggle between King Stephen and the Empress Maud. Will the installation of Saint Winifred's bones be accompanied by a miracle? So far Shrewsbury has not been favoured with a miracle, and certainly there are many who are hoping for her favour.

In the early hours of listening to the novel, I found myself thinking that the series had dated a little. The language is bit more formal than that of more modern writing, but then I found that as the story developed, that didn't really matter. It helps if you know a bit of the political background when you are reading the novel, and that may have been what frustrated me at the beginning - I was struggling to resurrect my history, couldn't quite remember who was vying for what. And then this is #10 in the Cadfael series, and things have been revealed about his earlier life that it helps to know about.

But if you like historical mysteries, then this is a series you will enjoy. It is not for nothing that the CWA awards for historical mystery is dedicated to Ellis Peters. And she had such a great love of this period in English history and this particular part of England. So get to a library and borrow the series, starting at the beginning. Or check out the CWA page for other historical mystery reading.

Check out my other Ellis Peters posts.

Kerrie - Thanks for this review. I happen to really like the Cadfael series, but I agree with you that the language takes getting used to. And absolutely, those new to the series will get the most out of it if they start from the beginning. It is worth the effort, in my opinion.

Thanks Margot - they are good reads. I was interested in how my feelings about it changed too as the story progressed