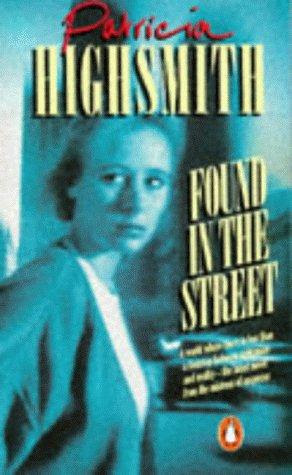 This week's contribution to Pattinase's Friday's Forgotten Books comes from my "little green book" towards the end of 1990.

FOUND IN THE STREET was published in 1986.

Publisher's Weekly doesn't give it a particularly good wrap up.

Highsmith is best known for Strangers On a Train, basis for the prizewinning Hitchcock film, one of her 19 eerie novels. The new one pulses with the beat of Greenwich Village where chance brings ill-assorted people together. Ralph Linderman, a middle-aged security guard, finds a wallet and takes it to its owner, artist Jack Sutherland who lives nearby with his wife Natalia and their small daughter. Meeting young Elsie Tyler, a waitress, Jack learns that Ralph harasses her continually, warning her away from ''bad company.'' The girl's vivid beauty attracts Jack and bisexual Natalia, who team up with their bohemian friends and create a modeling career for Elsie, practically overnight. Trouble develops both from Ralph and from the girl's lesbian lovers, along with several curiously unrelated incidents that leave the reader vaguely unsatisfied. The story's intoxicating flavor and promise beg for a sounder structure than the ambiguous ending provides.

Oddly enough I had this in my hands yesterday, wondering if I had read it or not.

I've been working my way through all of Patrica Highsmith's works. Hope you're not affected by the flooding we see each night on the NEWS.

This would presumably be the novel Highsmith was working on about the time she revisited Marijane Meaker (who as "Vin Packer" and others was a major Gold Medal writer as well as editorial staffer, and has since been important as YA writer "M. E, Kerr"), decades after their serious romantic affair/cohabitation in the 1950s Greenwich Village, as recounted in Meaker's memoir HIGHSMITH.

Indeed, I gather Adelaide hasn't been too badly messed over by the weather plaguing Bribane and such, and hope I gather correctly...hell of a way to end a drought, if it Does end the dought...

I remember this as my least favourite Highsmith from a time when I pigged out on her stuff.

Since I too have pigged out on Highsmith and always like her stuff no matter the flaws, I'll have to read this despite the reviews. I think it's the last one I haven't read. Thanks for the reminder (I hope).