Review; THE MAN WHO WENT UP IN SMOKE, Maj Sjowall & Per Wahloo 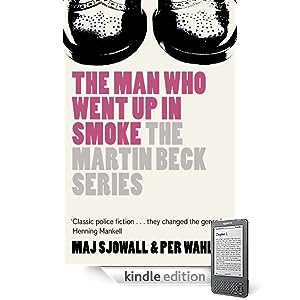 Martin Beck has just begun his holiday: an August spent with his family on a small island off the coast of Sweden. But when a neighbour gets a phone call, Beck finds himself packed off to Budapest, where a boorish journalist has vanished without a trace. Instead of passing leisurely sun-filled days with his children, Beck must troll about in the Eastern Europe underworld for a man nobody knows, with the aid of the coolly efficient local police, who do business while soaking at the public baths - and at the risk of vanishing along with his quarry.

Martin Beck could not remember ever being given such a hopeless, meaningless assignment and there are several times after he arrives in Budapest when he feels useless, directionless, as if there is something he ought to be doing, but has no idea what. He contrasts it with his previous case where his involvement in solving a murder had become a personal need.


Inwardly he cursed the strange impulse that had made him take on this pointless assignment. The possibilities of his solving the case became more and more remote. He was alone and without an idea in his head. And if, on the other hand, he had had any ideas, he would have lacked resources to implement them.

He knows of course why he has taken this case on - "a kind of occupational disease that forced him to take on all assignments and do his best to solve them."

And then he realises he is being followed and the followers make the mistake of attacking him. Beck realises he is on the track of something even though at that point he is not sure what. What he refers to as his "policeman's soul" kicks in, and he begins to see connections, and ideas begin to generate.

This is a fascinating read. At about the same time as Martin Beck comes alive with this case, the author tricks the reader into seeing what Beck sees, coming to a similar conclusion. It is hard to explain how this happens, but the story proceeds with pace from that point. And then it all comes together!

Mini-reviews from my records

THE MAN ON THE BALCONY (1967), my rating 4.8
Written with Per Wahloo and set in Stockholm. The introduction in THE MAN ON THE BALCONY, written by Andrew Taylor, comments on the fact that the Martin Beck series has stood the test of time, as fresh now as when this one was written 40 years ago. The man on the balcony is observed, as he constantly watches children in the street, by a neighbour who decides to report him to the police. But he hasn't done anything and the report disappears in the swamp of more pressing cases - a mugger who attacks elderly women in the dark and steals their money, and a series of murders of young girls. The mugger is caught and it is discovered that he probably saw the killer.  Andrew Taylor points out how Sjowall and Wahloo pioneered a new trend in crime fiction veering away from the whodunnit towards the whydunnit. For me what was also interesting was how their Communist/Marxist background coloured their view of what was causing the breakdown of society and the resultant crime.

THE LAUGHING POLICEMAN (1968), my rating 4.8
One blustery November evening someone guns down eight occupants of a Stockholm bus - one of whom was a detective. Eight people together purely by coincidence - perhaps. But, above all, why was that policeman - a solitary and ambitious man - on that bus? An intriguing many stranded mystery, written with co-author (husband) Per Wahloo. A very unexpected ending. Police procedural which takes a very candid look at how organised detection in Sweden actually works. But their procedures do seem very different. The Laughing Policeman won the Edgar in 1971 - the only translated novel ever to do so. Maj Sjöwall (1935--) and Per Wahlöö (1926-75) were husband and wife. They were both committed Marxists and, between 1965 and 1975, they collaborated on ten mysteries featuring Martin Beck. Four of the books have been made into films, most famously The Laughing Policeman, which starred Walter Matthau Worth looking out for.

I recently re-read THE MAN WHO WENT UP IN SMOKE. Terrific book.
Good review, Kerrie. I like Sjowall and Wahloo very much. I remember reading all the books at one time, but damn if I can remember what any of them were about. Time to re-read, I think.

Ha, I just posted a review of The Man on the Balcony. Great series, and reminds me of Ed McBain's 87th precinct, maybe because they start in the 1960s as well. I can't wait to read more of this series.

I meant to comment too that it reminded me a bit of Inspector Knutas being "deprived" of his holiday in Marie Jungstedt's UNKNOWN.
In both cases Beck and Knutas are looking forward to their holiday in some ways, but are easily called back to work. Tarred with the same brush in more ways than one I think.

Kerrie - A fine review of a terrific read :-). Thanks! I happen to like Martin Beck quite a lot, so I'm glad you reminded me of him.

And there are some interesting parallels between this series and the 87th Precinct series. It's said that McBain took some of his inspiration from this series.