An eventful week - in remembrance of Ernie 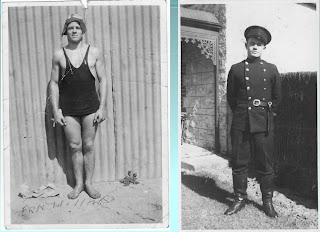 I usually don't venture outside crime fiction with my blog except on rare family occasions.

But one of those occurred this week with the death of my father on Monday at the ripe old age of 94, only 6 weeks off his 95th birthday. So today's blog post is dedicated to him.

The funeral is next Monday, and my sister has written the eulogy based on one that Dad started 15 years ago.
I have created a power point slide show to be run during "reflection time". 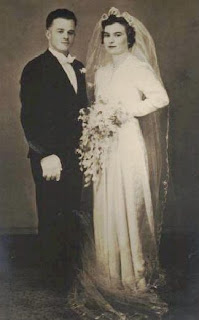 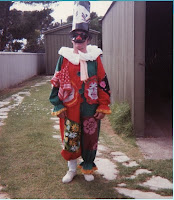 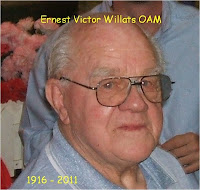 He was always active in the community, believed in being involved in everything, a life member of a huge number of organisations, and was made a Member of the Order of Australia in 1988.

He and Mum were named Elderly Citizens of the Year in their local council area on Australia Day 2010.

He was immensely proud of his family and always encouraging. 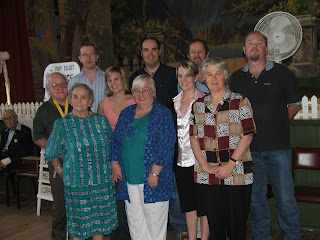 The number of lives he touched must be in the thousands.
Farewell Ernie!

I am so sorry to hear about your loss. I know just how difficult it is because my 91 year old father passed away on December 29. I'm trying to focus on the fact that he had a long, full life, and hope you're able to do the same.

Kerrie, so very sorry to hear of your loss. This was a beautiful tribute to your Father. Wonderful photos of him and the family. May your memories give you comfort in this difficult time. Keeping you and your family in my thoughts and prayers.

Kerrie - I truly am saddened at your loss. This is a beautiful post in your father's memory, and I'm so thankful you shared just a bit of his life with us. I wish you well during this difficult time. My thoughts and prayers are with you...

Kerrie, I'm sorry about the loss of your father. Thanks for sharing with us and posting the lovely pictures. 70 years is a grand old time to have been married. Hugs to you!

Kerrie my thoughts are with you at this sad time, you are lucky to have such lovely memories of your dad and thanks for sharing a few of them with us.

I am so sorry about your loss. Thank you for sharing his pictures with us. And your beautiful tribute.

I'm so sorry to hear of your loss. Your father sounds a wonderful, caring man. My thoughts are with you and your family at this sad time.

I'm sorry to hear about the loss of your father, Kerrie. My thoughts are with you and your family.

So sorry to hear about your loss. Thank you for sharing your tribute with us. It was beautiful and moving post.

Dear Kerrie
So sorry to hear about the death of your beloved Father, you and your Family are in my thoughts & prayers.

My condolences on your loss, Kerrie.
I'm thinking of you and your family.
Best wishes
Maxine.

My sincere condolences. I love the pictures. What an awesome tribute!

I love the photos you have posted, Kerrie - and meeting a man I didn't know. Hope your family will enjoy sharing all the memories.

What a lovely tribute to your father is posted here. The photographs are wonderful.

I'm very sorry for you and your family's loss of such a vibrant man.

My condolences to you and your family Kerrie. I will be thinking of you on Monday as you say goodbye to your beloved father.

Many thnaks for your kind thoughts everyone. My sister reminded me that Dad was one of those people who believed that you really need to work for everything and that nothing will happen if you don't take a pro-active role in your communities of choice. Not bad values to inherit!