Review: MAIGRET & the MAN on the BOULEVARD, Georges Simenon 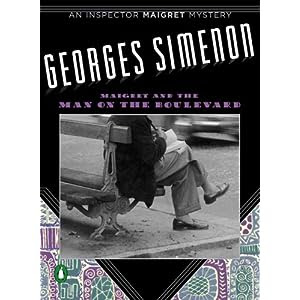 Product description (Amazon)
Simenon's tenacious detective pieces together the life of a man who for three years lived a secret life-until he is found stabbed to death in an alleyway.

The concept of a murder victim having a secret life that his family knew nothing of is one that plenty of writers since Simenon have explored. But once Louis Thouret's wife states that her dead husband is wearing shoes and a tie that she has never seen, and then Maigret discovers that the firm that he supposedly works for has been out of business for three years, then there are other questions that Maigret absolutely must have answers to. What does Louis Thouret do during the day? Where does he keep the clothes he wears during the day, because he certainly doesn't leave home in them in the morning. Does he have another job? Where is his income coming from? Why was he in the dead-end alley where he was murdered? And finally - who murdered Louis Thouret and why?

By today's standards MAIGRET & the MAN on the BOULEVARD is a relatively short novel, and thus a quick read. Maigret is chafing a bit at the idea that as the Chief he should be giving the orders, and planning the investigation, rather than doing the spade work which he loves to do.

MAIGRET & the MAN on the BOULEVARD comes roughly in the middle of Simenon's publishing career, and for me epitomised what he was well known for - an economy of style, at the same time as masterful written dialogue.

Other reviews:
Books to the Ceiling

I'll be using MAIGRET & the MAN on the BOULEVARD in the Vintage Mystery Reading Challenge and other challenges.

Kerrie - I agree with you, both about Simenon's style and about Maigret's preference for doing the actually work of an investigation. Thanks much for this review.

I read some Maigret stories when I was younger, but I think they are a bit quiet.

It's been a while since I read any of the Maigret stories. He's okay...but I never really took to him like some of the other classic detectives.