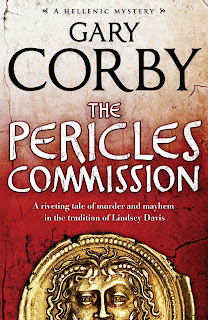 Athens, 461BC.  A dead man falls from the sky, landing at the feet of a surprised Nicolaos.
It doesn't normally rain corpses.  This one is the politician Ephialtes, who only days before had turned Athens into a democracy.
Rising young statesman Pericles commissions Nicolaos to find the assassin.  Nico walks the mean streets of Classical Athens in search of a killer, but what's really on his mind is how to get closer - much closer - to Diotima, an intelligent and annoyingly virgin priestess, and how to shake off his irritating twelve year old brother, Socrates . . .

My take:
This novel had me hooked from the beginning.
How could I resist this opening paragraph?


A dead man fell from the sky, landing at my feet with a thud. I stopped and stood there like a fool, astonished to see him lying where I was about to step. He lay facedown in the dirt, arms spread wide, with an arrow protruding out of his back. He'd been shot through the heart.

Nicolaos recognises the body as Ephialtes, the man who had brought full democracy to Athens. He doesn't however recognise the man who turns the body over, Pericles, part of Athenian aristocracy. Pericles is convinced that his friend and mentor Ephialtes has been murdered at the instigation of the Council of the Areopagus whom he had taken power from.

Nicolaos is just twenty, just finished ephebe training, and not really the best person Pericles could have chosen to investigate the death of his friend, but the two seem to hit it off right from the beginning. Athens has no police force (really a modern phenomenon) and such investigations are usually undertaken by families or tribal districts. And so Nicolaos begins his political education, finding out how the Athenian city state really works.

In the blurb on the back cover Kelli Stanley calls THE PERICLES COMMISSION "a rollicking romp" and I enjoyed both that aspect and the detailed background of Athenian history, from the "Timeline to Democracy" and the list of "actors" in the opening pages, to the thoughtfully provided Glossary at the end. In the Author's Note at the end Gary Corby says "Perhaps the greatest joy of writing a book like this is interweaving fiction into the fabric of truth" and I think he does that very well.

This is Gary Corby's debut novel, seemingly at least to have a sequel, if the implications of the final pages come to fruition.

About the author:
Gary Corby has long been fascinated by ancient history, finding it more exciting and bizarre than any modern thriller.  He's combined the ancient world with his love of whodunits, to create an historical mystery series set in Classical Greece.  Gary lives in Sydney, Australia, with his wife and two daughters.  He blogs at A Dead Man Fell From The Sky, on all things ancient, Athenian, and mysterious.

I debated with myself for quite a while about which of my "challenges" I would count this novel against.
I have decided on

I can see the advantage of participating in several challenges: four for the price of one ;D

Kerrie - Thanks for this fine review. This is definitely an author I'm on the lookout for...

It will all catch up with me pretty soon Dorte.

Margot I think you would greatly enjoy this