This week's contribution to Pattinase's Friday's Forgotten Books comes from my records for July 1992 and illustrates again how I have been a reader of short stories for quite a long time. 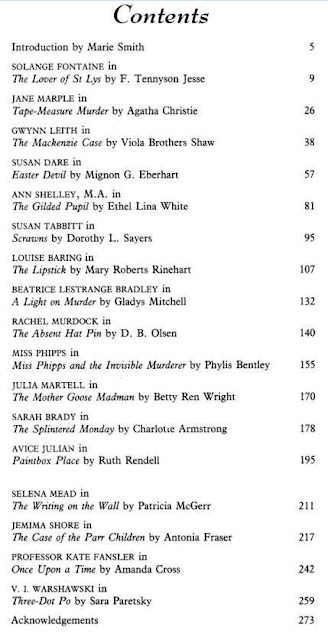 ISBN: 9780806511573
Format: Paperback
Published: 19th October 1989
Blurb
Here is a unique collection of mystery stories featuring women detectives, all written by women. For the first time the top women mystery writers are presented together in one volume.

"Ms. Murder" includes some of the best fiction by such writers, including Amanda Cross, Ruth Rendell, Dorothy L. Sayers, Agatha Christie and Antonia Fraser. The book traces the evolution of the female sleuth from F. Tennyson Jesse's Solange Fontaine (in a newly discovered story making its first appearance here in any book) to Sarah Paretsky's tough Chicago investigator V. I. Warshawski, who lives life entirely on her own terms.

The detectives in these stories are shrewd, sophisticated, even hard-boiled. Amateur or professional, they unravel mysteries that involve the reader right from the start. From Edwardian London to sleek modern Chicago, from discerning academics to gun-toting P.I.'s, "Ms. Murder" presents the best by the best. It is destined to become a collectable classic.

I don´t read many short stories myself, but such collections of stories by great writers are fine when I teach my students about crime fiction. Instead of one novel, I can read 4-5 short stories with them.

Lipstick and a Luger... that's one for the girls. I like the title :)

Looks like a good combination of well-known and lesser-known authors. My mother would love this! She reads primarily stories with female protagonists written by women authors.