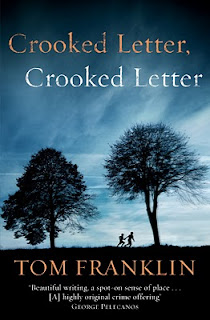 Amos, Mississippi, is a quiet town. Silas Jones is its sole law enforcement officer. The last excitement here was nearly twenty years ago, when a teenage girl disappeared on a date with Larry Ott, Silas' one-time boyhood friend. The law couldn't prove Larry guilty, but the whole town has shunned him ever since.
Then the town's peace is shattered when someone tries to kill the reclusive Ott, another young woman goes missing, and the town's drug dealer is murdered. Woven through the tautly written murder story is the unspoken secret that hangs over the lives of two men – one black, one white.


The Rutherford girl had been missing for eight days when Larry Ott returned home and found a monster waiting in his house.

We have a saying downunder, mud sticks, and that's what happened to Larry Ott. When Cindy Walker disappeared when Larry took her out on a date, there was no evidence to suggest that he had killed her, or that she was even dead, but life changed for Larry and his family. He had always seemed a bit of a disappointment to his father, a book reader, not a sportsman, apparently not destined to be a mechanic like his father. After he was cleared of Cindy's disappearance, Larry went into the army, became a mechanic, and came back to Chabot, Mississippi to be labelled Crazy Larry and to live the life of a recluse, always under suspicion when a child disappeared.

In part CROOKED LETTER, CROOKED LETTER is Larry's story, but it also the story of his former friend, Silas Jones, known as 32, and now a policeman working out of the county office. In some ways Silas had the attributes Larry didn't: a baseball player all the girls liked. Larry and Silas share a bond although neither really understands why or exactly what the bond is.

The book explores relationships in a small Mississippi town where segregation and accompanying class differences had once been entrenched. We glimpse too how life has changed over a period of about thirty years. That makes it a story of a nation too, and makes this novel much more than crime fiction.

An excellent read. One of those books that will stay in your mind long after you've read it.

Other Reviews to check:
Listed in my books for the 2011 Global Reading Challenge.

Kerrie - OK, this one goes on my TBR list - and I was doing so well at trying to whittle it down a bit before adding to it *sigh*...;-)

This was on my top 10 last year. Wonderful writing. Great storyline.

I just finished this one and really liked it a lot. I felt so bad for Larry and all he went through.

This sounds interesting. Thanks for recommending it.

I wasn't sure about this one but a few trusted bloggers have really enjoyed it.

Thanks, Kerrie. Your review and 4.8 rating matter and re-recommend this book.

Everywhere I go on the Internet, I see this book recommended by book bloggers and nominated for awards.

So, it's going on my immediate TBR list and I turn to the library.

So glad you enjoyed this one, Kerrie - and thank you for the link to my review, too. I really liked the literary aspects to this book, and how it addressed some contemporary issues (like bullying)