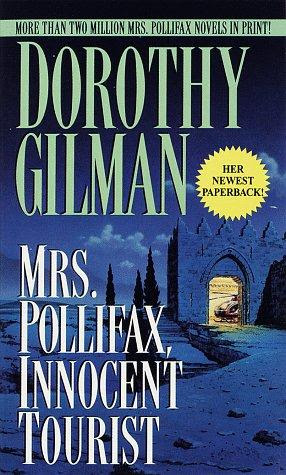 Blurb:
The spry Connecticut matron and secret weapon for the CIA, Mrs. Pollifax, poses as a New York City bag lady in order to catch a Middle Eastern smuggler who holds the key to the power of Iraqi strongman Saddam Hussein.

About the author:
Dorothy Gilman (1923 - ) is a United States author of mystery and spy fiction. She is most well-known for the Mrs. Pollifax series of spy novels, about spy and grandmother Emily Pollifax, who chooses to become a spy in her 60s, and who stars in fourteen books written over three decades. Gilman's books tends to feature unlikely heroines, often travelling to exotic locales.

My take:
Mrs Pollifax is commissioned by the CIA to accompany a retired CIA agent John Farrell to Jordan and Amman to retrieve the final manuscript of a dissident Iraqi novelist Dib Assen, allegedly recently murdered in an Iraqi prison. Mrs Pollifax will add credence to their tourist disguise while Farrell carries out his mission to retrieve the manuscript at a rendezvous at a castle near Amman. It takes them a while to realise that they have been under surveillance from the very beginning.

MRS POLLIFAX, INNOCENT TOURIST reminded me of plots that Agatha Christie constructed back in the 1920s especially the ones that involved Tommy & Tuppence, except that INNOCENT TOURIST is played out against the backdrop of the aftermath of the Gulf War of the 1990-1991.
The plot background details about Saddam Hussein and the political situation in Iraq after the Gulf War seemed mostly correct if a bit simplified.

Emily Pollifax seems like a less fragile version of Jane Marple.
However the whole plot felt a tad unrealistic, even though I liked the description of their Bedu guide and his teenage sister. The way the CIA uses Mrs Pollifax as an "unofficial" agent seems most unlikely.

I've been thinking about whether this book qualifies as a "cozy" and have decided that it does despite containing elements that could be described as "thriller".

Dorothy Gilman wrote INNOCENT TOURIST towards the end of her writing life. The series had begun just over 30 years earlier back in 1966 and I couldn't help feeling that the style of INNOCENT TOURIST hadn't really moved with the times. However it was a quick and entertaining read, partly because of the length but also because the writing style is not particularly complex.

I love the Mrs. Pollifax stories and have read several of them a couple of times. Sometimes smaltzy and dated is good!

I´d definitely call the Miss Pollifax stories cosy. I read the first handful or so some years ago, but I thought the later stories were weaker than the first ones.

I've read a couple of the Mrs. Pollifax books and enjoyed the idea of an older woman outsmarting people because they make assumptions about her based on her age and gender. They are kind of silly at times, but that's OK, too.

Strange timing! I was just out yesterday on Amazon looking for the first in this series for Kindle--and it isn't on Kindle yet! ARGH.

I've been wanting to read at least a few of the series for a long time. I'll either have to find a used paperback or hope they are on kindle soon.