Publisher's Blurb:
In the small Oxfordshire village where Ken and Meg Clifton spend their school holidays, the Fair is the most exciting thing that ever happens - that is, until a double murder is suddenly committed.

LATE, LATE IN THE EVENING, we are told on the dustjacket, returns to the days before Gladys Mitchell's sleuth, Mrs Beatrice Adela LeStrange Bradley, became Dame Beatrice.

This is the only title I have read in the series and was probably not a good one to start with.

The structure of the novel is difficult, apart from being set in the past, there are three narrators: Mrs Bradley herself who does not really feature until the second half of the novel, in which she solves the crime; young Margaret (Meg) Clifton, 10 years old, and her younger brother Kenneth, and between them they do all the ground work. They find out a murder has been committed, and save a gypsy from being accused of it. The third narrator is the local matriarch and lady of the manor, who engages Mrs Bradley to make a psychiatric assessment of her brother who appears to have become deranged and is digging holes all over the village. When he disappears, all the strands begin to come together.

The structure is made more complicated by the fact that Meg Clifton is speaking in retrospect,  harking back to days long gone, to one of Mrs Bradley's first cases. Mrs Bradley's account on the other hand mainly takes the form of letters to Sir Walter - and I don't have a clue who he was.

One aspect that slowed my reading was the author's insistence on reproducing the dialect of one of the families in Hill village where the action takes place.
Here is a sample:


So you says. A lettle bet of a lah-di-dah, ennee? Seems loike I heered hem talken to you t'other day loike the gentry talks, and that's talk as Oi don't 'old weth, nor moi dad neether.

I defy you to read that quickly! 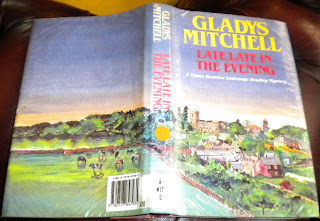 For all that, it is an interesting cozy plot from an author who was obviously popular in her day. LATE, LATE IN THE EVENING has the air of a vintage novel, of earlier times, although it was not published until 1976. Perhaps it sat in the bottom drawer for a time?
I couldn't find a cover image for the copy I had so have photographed it. It is a cozy gem!

I'm adding it to my list of  Cruisin' thru Cozies Reading Challenge and British Books Challenge novels.

From Wikipedia
Mitchell was an early member of the Detection Club along with G. K. Chesterton, Agatha Christie and Dorothy L. Sayers and throughout the 1930s was considered to be one of the "Big Three women detective writers", but she often challenged and mocked the conventions of the genre - notably in her earliest books, such as the first novel Speedy Death, where there is a particularly surprising twist to the plot, or her parodies of Christie in The Mystery of a Butcher's Shop (1929) and The Saltmarsh Murders (1932).
You may have seen the BBC television series, The Mrs Bradley Mysteries (starring Diana Rigg), produced in 1999.

Gladys Mitchell  wrote at least one novel a year throughout her career. 1929-1983.  She also wrote under the pseudonyms Stephen Hockaby and Malcolm Torrie, and wrote ten children's books under her own name.

Kerrie - I haven't read this series, either, so I was interested in what you had to say about this one. I can completely understand how the writing style slowed you down, and the changing points of view sound like a challenge, too. But the story - the plot - sounds interesting.

But the story - the plot - sounds interesting.