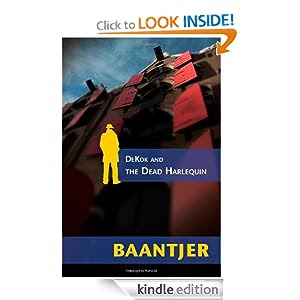 This Baantjer mystery delves into a grotesque double murder in a well-known Amsterdam hotel.

In a surprising twist, Inspector DeKok has nightly conversations with the murderer and tries everything possible to prevent the man from giving himself up to the police.

Risking the anger of his superiors, DeKok goes so far as to disappear in order to prevent the perpetrator from being found. Meanwhile, two unexpected characters add to the web of confusion: a six-year-old girl who never sleeps and a respected accountant who seeks DeKok's advice on committing the perfect crime. With Dead Harlequin, Baantjer has created yet another intelligent, absorbing tale.

This was a story that engaged me right from the beginning, not just the story itself but the characters of the detective duo, De Kok (Kay oh kay) and his younger assistant Vledder, and the patches of humour that often coloured the text.

The style of the text reminded me a bit of Georges Simenon, and De Kok is a bit like Maigret in size and in the fact that he often keeps things to himself. Mrs De Kok makes a cameo appearance once or twice too, a bit like Madame Maigret, mainly used as a sounding board.

To De Kok's assistant the way forward is often frustratingly clear and his boss sees obstacles where Vledder sees none. The duo reminded me a bit also of Dalziel and Pascoe although Vledder is hardly an intellectual. Like Andy Dalziel and Peter Diamond, Jurriaan De Kok has his own way of doing things which his immediate boss finds frustrating.

The hook comes at the beginning of the novel:


He had read the strange note several times. Each time he read it, he was as surprised as he had been the first time.

This was an entirely new wrinkle in a career of more than twenty years. A person contacts Homicide and details in a short, businesslike letter his intention to kill someone. DeKok felt he'd entered the theater of the absurd.

But it is the humourous descriptions that I really loved.


A handsome man entered. He gave a confusing first impression. There was something unbalanced about his appearance. He looked something like a Calvinist church warden out on a weekday. He wore a long, somber dark coat, but the pearl gray scarf he wore outside the collar gave him an elegant, worldly appearance. The most noticeable feature, however, was his high forehead, which was accented by a receding hairline. A mocking grin played around his weak, thin-lipped mouth.

and the very human qualities of DeKok:


DeKok felt his feet starting to hurt. It was a bad sign, he knew. His feet always hurt when a case did not progress satisfactorily.

Like many of the more "modern" detectives DeKok has his own sense of justice and plays by his own rules. He has great empathy with the victims of crime.

I'd love to be able to say that I will read a few more from this series, but Amazon appears to have only this title on Kindle, although my local library has 5 hard copies.

The following comes from the last pages of the Kindle version of DEKOK AND THE DEAD HARLEQUIN.
A. C. Baantjer [1923-2010] is one of the most widely read authors in the  Netherlands. A former detective inspector of the Amsterdam  police, his fictional characters reflect the depth and personality  of individuals encountered during his nearly forty-year career  in law enforcement.
Baantjer was honored with the first-ever Master Prize of the  Society of Dutch-Language Crime Writers. He has also been  knighted by the Dutch monarchy for his lifetime achievements.

The sixty crime novels featuring Inspector DeKok  written by Baantjer have achieved a large following among  readers in the Netherlands. A television series based on these  novels reaches an even wider Dutch audience. Launched nearly  a decade ago, over 100 episodes of the Baantier series have aired  on Dutch channel RTL4.
Known as the "Dutch Conan Doyle," Baantjer's following  continues to grow and conquer new territory.

I'm making this a contribution to this week's edition of Pattinase's Friday's Forgotten Books.
Posted by Kerrie at 4:48:00 pm

Kerrie - Nice review, for which thanks. Such a prolific writer wasn't he? And I like your comparison to Maigret.

Wow the Kindle file is $8, much more than I was expecting! Guess I'll miss this one though it sounds really good.