Continuing with my decision to feature books I've read this year, then my choice for the letter P is A TRICK OF THE LIGHT which I gave 5.0 to.

Well, actually my choice is Louise Penny, who has just published another in this fabulous Three Pines series.

Synopsis  of THE BEAUTIFUL MYSTERY from Amazon.

No outsiders are ever admitted to the monastery of Saint-Gilbert-Entre-les-Loups, hidden deep in the wilderness of Quebec, where two dozen cloistered monks live in peace and prayer. They grow vegetables, they tend chickens, they make chocolate. And they sing. Ironically, for a community that has taken a vow of silence, the monks have become world-famous for their glorious voices, raised in ancient chants whose effect on both singer and listener is so profound it is known as “the beautiful mystery.” 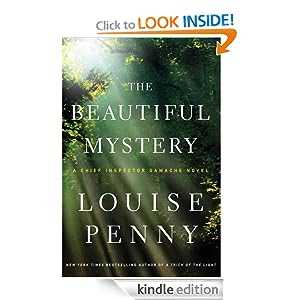 But when the renowned choir director is murdered, the lock on the monastery’s massive wooden door is drawn back to admit Chief Inspector Armand Gamache and Jean-Guy Beauvoir of the Sûreté du Québec. There they discover disquiet beneath the silence, discord in the apparent harmony. One of the brothers, in this life of  prayer and contemplation, has been contemplating murder.

As the peace of the monastery crumbles, Gamache is forced to confront some of his own demons, as well as those roaming the remote corridors. Before finding the killer, before restoring peace, the Chief must first consider the divine, the human, and the cracks in between.

I have a copy on my Kindle to savour some time.

There are now 8 titles in the Three Pines series and you'd be well advised to read them in order.

However you can click on the cover for THE BEAUTIFUL MYSTERY to be transported to Amazon to read the Prologue and the first couple of chapters.
Check them all at Louise Penny's website.

See what others have featured for the letter P in the Crime Fiction Alphabet.

Kerrie - Glad to see that you're featuring Louise Penny. I really do like her Gamache series so much and although I confess I've not read this particular one yet, I have savoured the ones I have read.

I was glad to see you featured Louise Penny. I have read the first in the series and plan to read more soon (partly because she is a Canadian author and I have joined the Canadian Reading Challenge 6). I was lukewarm on the first book but have read your reviews and others that encourage me to go ahead and read the others.

Am anxious to read a Penny. See her mentioned so often on the blogs!

Ah, Kerrie, you are going to love THE BEAUTIFUL MYSTERY. It is so very good. Amazing and she'll win more awards for it.

Another author to check out. :)

I love this writer's books. I want to catch up on all her books.

I love Penny's Gamache series. I haven't read the newest yet, though, I'm waiting for our library to get it on audio.