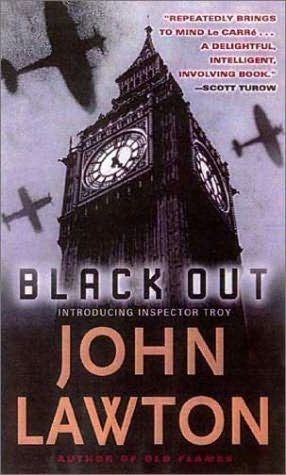 BLACK OUT is an outstanding debut thriller from a major new talent, featuring an original new detective, Sgt Frederick Troy, the son of a distinguished Russian emigre.

Children playing on an East End bombsite during the Blitz find a severed arm. This is no ordinary murder and Troy is soon on the trail of a German espionage network leading through a labyrinth of conspiracy and betrayal.

This is the first in Lawton's Frederick Troy series (see the list below), and yet it creates the impression that there is quite a bit of Troy back-story. Recently I read A LILY OF THE FIELD the beginning of which pre-dates BLACKOUT. I remembered a lot of Sergeant Troy's back story from that book, his  Russian emigre background in particular. Troy appears to have emerged in BLACK OUT a bit Venus like, fully formed. His boss regards him as Scotland Yard's "most intuitive detective", and he has certainly had a meteoric rise due to his ability to read and interpret a crime scene.

London in 1944 is a dangerous place. It is under heavy German bombardment and Troy is hit by bombs more than once. He is also shot, stabbed and coshed. He is a bit bulldog like in his sleuthing efforts. What matters to him is finally getting his man and he pursues that goal at all costs. There is a scene towards the end of BLACK OUT where Troy asks another character what she believes in. She responds that he doesn't have the right to ask anyone that question because his own beliefs are suspect. She says that he is unprincipled and will do anything to get to his final quarry.

I think what I didn't like about this book is that it is difficult to predict the chain of events. There are things that the reader can't possibly know and in fact the finally denouement really comes out of left field. I found it rather slow going in places, but some of the visual pictures were stunning.

What I liked about it too is the meticulous attention to historical detail and the feeling of authenticity of setting.  Having read only two in the series, as well as the synopses for the other five, I suspect that to get the full picture of Freddie Troy you do need to read them all, but I am not sure the order matters. Historically speaking RIPTIDE is set earlier in 1941, but A LILY OF THE FIELD begins even earlier in 1934. To me the overall impression is a bit like hopping about a patchwork quilt. There's a post at It’s a crime! (Or a mystery…) which gives a useful overview.

Other reviews to check
The Game's Afoot
Crime Scraps

The View from the Blue House

Never heard of this but it does sure sound good. I love this cover!! Think I'll try starting with the first. Thanks for the review!

I love this series and have read every one of them. One of my accomplishments this year, to finish this series. I also found some of the books slow in places, and some of them confusing and chaotic, but overall I loved the characters and the story and the setting. I can't decide if Lily of the Field or Bluffing Mr. Churchill is my favorite.

Like TracyK, I love this series and this author. I sometimes find them a bit OTT, too much being thrown in at once, and the unbelievable charm of Frederick Troy, with every woman throwing herself at him AND falling in love with him. But - for entertainment value he's topnotch. And is that Majorsfontein Lugg you can see round the corner from time to time, alongside the real people who feature....