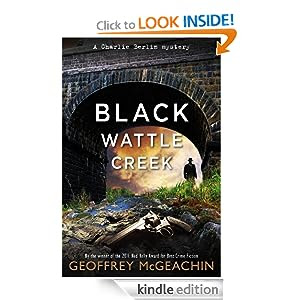 The insane are running the asylum in this cracking new Charlie Berlin thriller.

It's September 1957, two days before the VFL grand final, and Detective Sergeant Charlie Berlin finally has some time off. But there's no rest for this decent if damaged man, still troubled by his wartime experience as a bomber pilot and POW. A recently widowed friend asks a favour and he's dropped into something much bigger than he bargained for.

When he uncovers dubious practices at a Melbourne funeral parlour, it's quickly obvious that anyone asking questions is also asking for trouble. His offsider is beaten and left for dead, witnesses are warned off, Special Branch is on his case, and even Berlin's young family may be at risk.

His pursuit of the truth leads him to Blackwattle Creek, once an asylum for the criminally insane and now home to even darker evils. And if Berlin thought government machinations during World War II were devious, those of the Cold War leave them for dead . . .

A rattling good tale with a dry wit and a sobering core, Blackwattle Creek confirms Geoffrey McGeachin as one of our most entertaining and accomplished crime writers.

This is #2 in McGeachin's Charlie Berlin series and every bit as good as the first. It is set in 1957, 10 years after THE DIGGERS REST HOTEL; Charlie Berlin appears to be well established in the Victoria Police and working as a plain clothes detective out of Russell St. in Melbourne. The Olympics have been successfully held in Melbourne in 1956 and Australia is still reeling from the after effects, including having to accommodate Hungarian political refugees. The Australian government has agreed to allow British atomic scientists to carry out tests Maralinga near Woomera and the first were held just before the Olympics.

Charlie and his wife have a small family and now live in the Melbourne suburbs. At the beginning of the novel Charlie has been ordered to take some leave accrued during the Olympics. At the very beginning of his leave he gets sidetracked by a lying undertaker.

What I like about these novels is their feeling of historical authenticity and setting. I was a child in the 1950s and so many of the time markers McGeachin uses rang true for me: small things like Charlie polishing his children's shoes; the way the back yard is set up with the chook run and the vegetable plot; and the way his son Peter is storing up crackers for Bonfire Night under his bed. I think McGeachin is clever in his use of icons like these because it certainly gives the setting an appeal for my generation. I'm not sure it will work as well for an international audience.

McGeachin's style is laid-back and easy to read, Charlie Berlin's character is well developed, and his wife Rebecca is a good foil.

Kerrie - Oh, you have so whetted my appetite for this book! I must read it. I'm so glad it lives up to the promise of the first one.