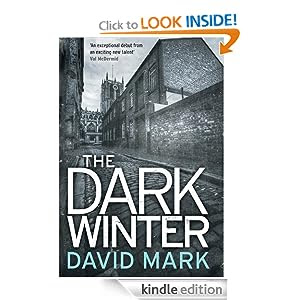 The victims – each a sole survivor of a past tragedy – killed in the manner they once cheated death. Somebody is playing God.
And it falls to DS Aector McAvoy to stop their deadly game.

Detective Sergeant Aector McAvoy comes to Hull's Serious and Organised Crime Unit under a bit of a cloud, a whistle blower, who exposed corruption in some of the most popular on Hull's force. Conversations cease when he walks into a room, people are obviously watching him.


McAvoy likes Nielsen. He’s one of the half-dozen new faces brought in six months back by the brass to try and wipe out the stench of the bad old days.

The era that had both made and cost McAvoy his name. Nailed him as the copper who cost a detective superintendent his job and sparked an internal investigation that scattered a crooked team of CID officers to the four winds. Who managed to glide through the whole thing without a blemish on his written record.

He’s the copper who did for Doug Roper, the copper who nearly died out at the woods beneath the Humber Bridge, at the hands of a man whose crimes will never be known by anybody other than a handful of senior officers who stitched his face up more expertly than the doctors at Hull Royal. He’s the copper who refused to take up the offer of an easy transfer to a cosy community station.

Who now finds himself on a team that doesn’t trust him, working for a boss who doesn’t rate him, and trying to blend into the background while carrying a Samsonite satchel with adjustable straps and waterproof bloody pockets …


I enjoyed this book from beginning to end. It is a police procedural with a difference. It starts with an intriguing case - a trawler man who survived a wreck 40 years before, goes overboard during the making of a video about events during The Dark Winter.

Aector McAvoy is hard to miss for he is big..


The waitress surveys him. This big, barrel-chested man in the designer double-breasted coat. Good-looking, even with the unruly hair and broad, farmer’s face. He must be an easy six-foot-five, but there’s a gentleness about his movements, his gestures, that suggest he is afraid of his own size; as if constantly apprehensive that he will break something more fragile than himself. She can’t place his accent any more accurately than ‘posh’ and ‘Scottish’.

She casts another glance over his well-muscled body, his thick, bullish neck, his round, square-jawed face, which, in this light, seems striped with the faintest of scars.

One of the things about beginning a new series, for I am sure this is the beginning of one, is meeting new characters, and I think they are rarely as well described as these are.

In the wake of the whistle blowing the Serious and Organised Crime Unit got a new boss: Trish Pharaoh was an unexpected choice and she is turning out to be far more assertive and feisty than her bosses thought she would. She too is an interesting character: a mother of 4 who tends to treat her team as she does her children.

See another review on Euro Crime by Geoff Jones

It's been a good while since I enjoyed a police procedural and this one sounds incredible. I'm intrigued by the premise of a killer playing the role of judge, jury and executioner.