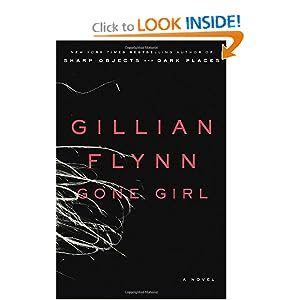 Marriage can be a real killer.
One of the most critically acclaimed suspense writers of our time, New York Times bestseller Gillian Flynn takes that statement to its darkest place in this unputdownable masterpiece about a marriage gone terribly, terribly wrong. The Chicago Tribune proclaimed that her work “draws you in and keeps you reading with the force of a pure but nasty addiction.” Gone Girl’s toxic mix of sharp-edged wit and deliciously chilling prose creates a nerve-fraying thriller that confounds you at every turn.

On a warm summer morning in North Carthage, Missouri, it is Nick and Amy Dunne’s fifth wedding anniversary. Presents are being wrapped and reservations are being made when Nick’s clever and beautiful wife disappears from their rented McMansion on the Mississippi River. Husband-of-the-Year Nick isn’t doing himself any favors with cringe-worthy daydreams about the slope and shape of his wife’s head, but passages from Amy's diary reveal the alpha-girl perfectionist could have put anyone dangerously on edge.

Under mounting pressure from the police and the media—as well as Amy’s fiercely doting parents—the town golden boy parades an endless series of lies, deceits, and inappropriate behavior. Nick is oddly evasive, and he’s definitely bitter—but is he really a killer?
As the cops close in, every couple in town is soon wondering how well they know the one that they love. With his twin sister, Margo, at his side, Nick stands by his innocence. Trouble is, if Nick didn’t do it, where is that beautiful wife? And what was in that silvery gift box hidden in the back of her bedroom closet?

With her razor-sharp writing and trademark psychological insight, Gillian Flynn delivers a fast-paced, devilishly dark, and ingeniously plotted thriller that confirms her status as one of the hottest writers around.

The first focal point of GONE GIRL is the disappearance of Amy Elliott Dunne on the morning of their 5th wedding anniversary, with husband Nick later unable to satisfactorily explain where he was between just after breakfast and noon when he turned up at The Bar which he owns with his sister Go.

The novel is narrated alternately by Nick and Amy and between them they fill in the details of their backgrounds, courtship, and marriage, their loss of their jobs as journalists in New York as a result of the 2008 financial meltdown, their move to Nick's home town to assist with caring for his parents, both critically ill. Nick's narration basically begins with Amy's disappearance while much of Amy's story is told through a diary she has written. It is quite late in the book before the two time frames catch up with each other.

Gillian Flynn says "You might say I specialize in difficult characters. Damaged, disturbed, or downright nasty."
Just how damaged and nasty the main characters in GONE GIRL are, including Amy's parents, psychologists who have written a best-selling series of nauseous children's books about Amazing Amy, is revealed as the narration progresses, and the tension mounts.

Has Nick Dunne killed his missing wife? What amazed me was how successfully the author manipulated my opinions and how I swung like the proverbial pendulum.

Of course there is more to the novel than this but my lips are sealed.
Was it a good read? Well yes, particularly when it makes a few wayward turns, and has an ending that probably no reader would predict.
It isn't the best book I'll read in 2013 I'm sure, but it's not a bad start to the year.

Another review to read: Reading Matters
Comments by the author on Amazon
Author's website

Kerrie, your review has intrigued me to the point of wanting to read it.

Hi Kerrie, I am new to reading your blog, and there is so much to explore, glad to find your site. I read this book in January too, have yet to review it, but I thought it was a good read too. Looking forward to following your blog now for great crime recommendations. I read other genres too but love crime books and have read a few good ones in January.

I was mesmerized by this book - it was like watching a car crash unfolding: you know it's horrible but you can't do anything to stop it. And you're just glad you aren't involved personally! Very good description of small-town Missouri, too.

Yes, I felt exactly as Marina Sofia did. I liked it because it was so well worked out - you couldn't doubt that Flynn knew exactly what she was doing when she started writing, she wasn't making it up as she went along. I featured it on my blog here http://clothesinbooks.blogspot.co.uk/2013/05/gone-girl-by-gillian-flynn.html

I loved the book, I was a little skeptical about it though considering it was my first pick from this particular author. She did not disappoint at all. There were parts where i was laughing and some where just waiting in anticipation what will happen next, Wishlisting the rest.