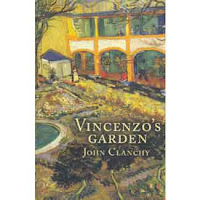 One of the dangers of attending an event like the recent Melbourne Writers Week is that you hear an author speak who encourages you to read outside your usual strait-jacket.

That's how I came to read VINCENZO'S GARDEN. This is a collection of seven short stories. The common theme is Vincent Van Gogh, whose painting not only graces the front cover of this edition, and the inside front cover, but also figures in a number of the stories. In each of the stories the central character faces a moral dilemma.

And, typical of me, the story that I enjoyed the most was the one that could easily included in a crime fiction anthology. The second story in the collection is Radinksy's Will. Emily Anthony intends to attend the funeral of her late husband's friend Frank Knowles. But an accident of geography means that she ends up at Radinksy's funeral instead, signs his condolence book, and thereby qualifies for a one tenth share of one million dollars. And so she becomes the victim of what she calls wickedness, and what we would call fraud.

Other stories in the collection:

Late Cruising
In an attempt to repair bridges that have been down for decades, Bernard Clare Collins agrees to drive north to Queensland to visit Macauley with whom he once shared a holiday in Van Gogh land near Arles. And on the way he picks up a hitchhiker. In this story we first see Vincenzo's Garden.

Leaper
This is the second story in this collection that would be acceptable in a crime fiction anthology. The narrator is a doctor having an affair. A freak road accident leaves a girl dead.

Vincenzo's Garden
Felicia at seventy three appears to have fallen in love with Vincenzo the Italian gardener. Aimee, her daughter, thinks her mother has dementia, and the doctor thinks Aimee is fantasising.

A Meditation for Magda
Burnt Offering

VINCENZO'S GARDEN won the Steele Rudd award and the Queensland Premier's Literary Award in 2005 and the ACT Book of the Year in 2006.