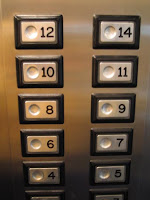 I was recently reminded that some people take the "unluckiness" of the number 13 very seriously, when the lift in the Washington hotel I was staying in apparently skipped from the 12th to the 14th floor. This is a phenomenon not confined to the USA, but often causes a great deal of mirth from less suspicious travellers.

Superstitions around the number 13 are entrenched in a number of cultures, and Agatha Christie acknowledged this in 3 titles (as far as I know - but were there more?)

THIRTEEN FOR LUCK
A republication "for younger readers" of 13 short stories, all of them previously published in the US, UK, or both.
The stories are
Accident (from The Listerdale Mystery);
The Bird with the Broken Wing and
The Face of Helen (from The Mysterious Mr. Quin);
The Blue Geranium and
The Four Suspects (from The Thirteen Problems);
The Girdle of Hippolyta and
The Nemean Lion (The Labours of Hercules);
The Market Basing Mystery (The Under Dog);
Problem at Pollensa Bay and
The Regatta Mystery (The Regatta Mystery);
The Tape-Measure Murder (Three Blind Mice);
The Unbreakable Alibi (Partners in Crime); and
The Veiled Lady (Poirot's Early Cases).
They are taken variously from 9 different books and include 4 Poirot stories, 3 Miss Marple stories, 1 of Tommy & Tuppence, 2 of Parker Pyne, and 2 of Mr. Quin.

In THIRTEEN AT DINNER (aka LORD EDGWARE DIES) Agatha Christie worked on a superstition that sitting 13 people at a table will result in the death of one member.

This was a good solid Christie read (as you'll see from my review) although Hercules Poirot always regarded the case as one of his failures.

It consists of 13 short stories, all dedicated to demonstrating the cleverness of Miss Marple, who mainly solves the mysteries by comparing them to her observations of life in St. Mary Mead.

Other authors have similarly used the number 13 in their titles.
Perhaps you'd like to comment on your favourite.

Kerrie - Isn't that interesting about the number 13? I've seen that in hotels, too. And, as you say, Christie certainly acknowledged that superstition. There are all kinds of sayings in different languages about how unlucky 13 is, too.

Kerrie,
It's true of D.C. apartment buildings, too! I think it's lovely.

My birth date is the 13th of a month, so I regard it as a good luck sign.
Cheers,
Brian

Hi 13 number is unluckily that is very true all is very impressive fore my life and also my work.