This is our final contribution to the crime fiction alphabet.
Z looked as if it would be a difficult letter to accommodate but thank goodness in my database there was an author whose name started with Z! (otherwise I would have had to get creative like I did with X)

This is a book I read back in 2005, and have never printed my mini-review of before. I gave it a rating of 5, which puts it among my best reads for that year.

Barcelona, 1945—A great world city lies shrouded in secrets after the war, and a boy mourning the loss of his mother finds solace in his love for an extraordinary book called The Shadow of the Wind, by an author named Julian Carax.He finds the book in a library referred to as "the cemetery of lost books".

When the boy searches for Carax's other books, it begins to dawn on him, to his horror, that someone has been systematically destroying every copy of every book the man has ever written.
Soon the boy realizes that The Shadow of the Wind is as dangerous to own as it is impossible to forget, for the mystery of its author's identity holds the key to an epic story of murder, madness, and doomed love that someone will go to any lengths to keep secret. 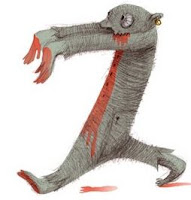 Fascinating multi-layered tale with lots of mystery. The tale spans about 60 years and history seems to be repeating itself.

SHADOW OF THE WIND was shortlisted among the best reads of 2005 by Richard and Judy.

Kerrie - Thank you for this; I must try to find this book. I really enjoy historical mysteries much, and this one sounds intriguing! You've just added (again ; ) ) to my TBR list : ).

I have had a copy of this sitting in my TBR shelves for about three years. I really ought to get around to reading it.

I thought about writing about Shadow of the Wind, but I read it too long ago to remember the details!

I've borrowed The Angel's Game from the library and I'm hoping it's as good.