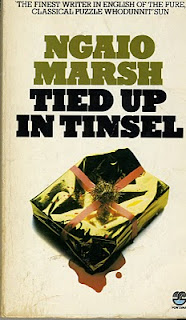 Every member of the staff at Halberds, but one, is a convicted murderer. Troy Alleyn, wife of DI Roderick Alleyn of Scotland Yard, is spending Christmas there, her husband out of the country. She is painting the portrait of Hilary Bill-Tasman, the rather eccentric and enormously wealth landed proprietor of Halberds Manor.

The other members of the Halberds Christmas houseparty, Hilary's Aunt Bed and Uncle Flea, his uncle Bert, and his fiance Cressida Tottenham, round out a rather unusual cast of characters.

Bill-Tasman has organised an elaborate Christmas Day treat for local children in which an ancient bewhiskered and bearded Druid arrives towing a sledge of presents. But after the event the Druid can't be found, and other pranks seem designed to cast the blame for his disappearance on the murderous staff.
Enter Roderick Alleyn just returned from Australia.

TIED UP IN TINSEL was among the last of Dame Ngaio Marsh's (1895-1982) mysteries, although she continued to publish another 5 titles, right up to her death. It reflects not only her gift for clever plotting but also has a very theatrical feel to it. Characteristically an early page displays a very useful cast of characters, and the whole story feels as if it could easily be dramatised. There are lots of places that have the reader grasping at straws in an attempt to solve the murder before Alleyn does. I must confess that the "how" was easier to deduce than the "why".

I had intended to use this title as my "New Zealand" offering in the 2010 Global Reading Challenge but have decided not to since TIED UP IN TINSEL is set entirely at an English manor. It is really a variant of a locked room mystery since for much of the time the characters are confined to the manor either by events or by the weather.

TIED UP IN TINSEL proves that even as she approached her 80s New Zealand's Dame Nagaio Marsh had not lost her ability to write a good yarn.

If you are in New Zealand, or visiting there, you might like to visit Dame Ngaio Marsh's home in Christchurch on the South Island.

At the end of last year author Vanda Symon reviewed TIED UP IN TINSEL for our Christmas reading. Her eye for description is delightful.

Kerrie - Thanks so much for profiling this book : )! I like Ngaio Marsh a lot, and I really do like this one very much. It was nice to be reminded of it.

Thanks for sharing the review of TIED UP IN TINSEL, Ngaio Marsh. I found it interesting. will order my copy soon.