The setting is Berlin in 1936, and Berlin is readying for the Olympic Games. Gunther's secretary Dagmarr is getting married to a member of the National Socialist Flying Corps.
When Gunther returns to his office after the wedding he finds a dark blue Mercedes convertible waiting for him.
Its occupant asks him to investigate the deaths of his daughter and son-in-law.
Gunther's investigation leads him to calling in favours from his former colleagues in the police force, and will eventually lead to him being imprisoned himself. 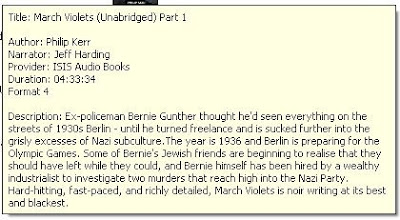 The setting of MARCH VIOLETS feels authentic and well researched, the author seems to have based his style on better known hard boiled noir writers. If anything I got a little tired of the plentiful-in-metaphors style.

However Jeff Harding does an excellent job of the narration even if it does feel as if it owes a lot to a Chicago gangster style.

MARCH VIOLETS is #1 in Kerr's Bernard Guther series. IF THE DEAD RISE NOT, which I read and reviewed recently, seems to have been set more or less in the same period. I found the time threads connecting the two a little confusing, but I guess that serves me right for reading them out of order.


Other reviews to check:
Crime Scraps

I like Jeff Harding's narration Kerrie - he did the Phillip Kerr book that I read too. Frankly I didn't like the story itself that much and you've highlighted one of the reasons - that it was trying a little too hard to be traditional noir-ish so it lost on two counts for me - it's my least favourite of the sub genres and I'm not convinced that a book written now ought to sound like a book written then.

not related to this post but I couldn't help noticing you have 8 books on the go at the moment! very impressive - I can only do about 3 at once before the plots start merging into each other.

that list is deceptive Bernadette. It is a notice of intent rather than an indication of what is actually happening.