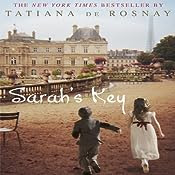 Blurb:
Paris, July 1942: Sarah, a 10 year-old girl, is arrested with her family by the French police in the Vel' d'Hiv' roundup, but not before she locks her younger brother in a cupboard in the family's apartment, thinking that she will be back within a few hours.

Paris, May 2002: On Vel' d'Hiv's 60th anniversary, journalist Julia Jarmond is asked to write an article about this black day in France's past. Through her contemporary investigation, she stumbles onto a trail of long-hidden family secrets that connect her to Sarah. Julia finds herself compelled to retrace the girl's ordeal, from that terrible term in the Vel d'Hiv', to the camps, and beyond. As she probes into Sarah's past, she begins to question her own place in France, and to reevaluate her marriage and her life.

You might say SARAH'S KEY is not crime fiction, but it is certainly about murder if genocide is murder. The initial setting is the roundup of the Jews in Paris by the French police under the Vichy government in July 1942. Those arrested eventually are sent to concentration camps like Auschwitz despite the fact that many of them, the children in particular, were French citizens who happened to be Jews.

The book is also about guilt: the guilt that Sarah feels about leaving Marcel locked in the cupboard, promising she would be back. But then she didn't understand what was happening to them.

This is a very powerful story, describing a piece of history that few of us have had first hand knowledge of. How many other stories like this one, we wonder, are buried in our past?

If I have one criticism of the story it is that Tatiana de Rosnay did not know when to bring the book to a close. What Julia Jarmond discovers has huge repercussions on her own life, the lives of both her immediate family, and those she contacts because of her discoveries. So it becomes Julia's story as well as Sarah's story. I was ready for the book to end before it did, but I understand the author's quandary.

I'm adding this to my list for the Historical Fiction Challenge

Kerrie - Oh, this looks like a powerful story. It raises all sorts of questions, too, and sounds absorbing. Thanks for the fine review.