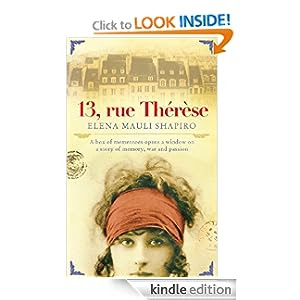 An American in Paris falls in love with two women, one of whom he can only only imagine, in this wonderful debut.
As he settles into his new office in Paris, American academic Trevor Stratton discovers a box full of century-old artifacts.
The pictures, letters and objects in the box relate to the life of Louise Brunet, a Frenchwoman who lived through both World Wars. Trevor begins to piece together the story of Louise's life: her love for a cousin who died in the war, her marriage to a man who works for her father, and her attraction to a neighbour in her building at 13 rue Therese.
As he becomes enamored with the charming, feisty Louise of his imagination, he notices another alluring Frenchwoman, his clerk Josianne, who planted the mysterious box in his office, and with whom he decides he is falling in love.

Another reviewer described this as a puzzle-novel, and that description fits quite well. Can I make it clear though, that, while it sits on the fringes of mystery, it is not crime fiction. (No crimes are committed) It is rather like the process of piecing the evidence together, after the fashion of a jigsaw puzzle. I remember doing something similar with history students years ago. They were provided with a folder of documents and photos and encouraged to weave a story.

As American researcher Trevor Stratton works his way through Louise Brunet's box he documents items and writes letters about them to a person who appears to be his mentor. Through Stratton the author fictionalises the events of Louise Brunet's life. The events are out of order, described as the items are removed from the box. Sometimes alternative events are described for us. Stratton's letters usually describe the item he has taken out of the box, but sometimes things are embellished even further by his imagination.

Elena Mauli Shapiro nearly pulls this off, but loses me just a bit when she allows Stratton to slip back in time and momentarily converse with characters who have been long dead. The reader does come away with a sense of what Brunet's life might have been like, so to that extent Shapiro is successful. She tells us in the foreword how the novel was inspired by Lousie Brunet's "real" box:


When I was a little girl growing up in Paris in the early 1980s, an old woman who lived a few floors up from my apartment died alone. Her name was Louise Brunet. She had no remaining relatives to come fetch her belongings, so the landlord had to clear them all out. He let the other tenants in the building scavenge through her stuff and take home silverware, jewellery, whatever they wanted. My mother salvaged a small box filled with mementos: old love letters from WWI, mesh church gloves, dried flowers, a rosary - many objects worth nothing but memories. This box is the sepulchre of Louise Brunet’s heart. The story behind the objects is lost; the objects are now the story. As I have carried this strange box through life and across the world, I have always intended to make a book out of it. This book now exists; you hold it in your hands. The Louise Brunet depicted within it is a fiction; the real Louise Brunet is irretrievable. Still, she gave me the stars. I merely drew the constellations.

In 13 RUE THERESE the box is in the possession of the academic department's secretary Josieanne who likes to leave it for a male academic to find, to see what he makes of it. Somehow the box always finds it's way back to her. And so she leaves it in a filing cabinet which the new American researcher will find in his new office. Trevor Stratton can't resist the temptation that the box provides.

In the novel many of the items are accompanied by footnotes which the reader is encouraged to look up as they often contain translations of French text, or historical information.

I read the book on my Kindle and sometimes the graphics did not come over at all well and I was left wishing for colour, or at the very least the ability to see a larger version of the image. All the footnotes were at the end of the novel and so you had to pop backwards and forwards in the text. This doesn't work all that well with Kindle's "last location" system as it meant my "last read location" on another device (the app. on my phone) was always recorded as a location towards the end of the novel.

Visit the website for the novel at 13ruetherese.com. There you can see scanned copies of everything that was in the box.

Elena Mauli Shapiro grew up in Paris, and currently lives in California with her husband. She has amassed literature and writing degrees in and around the Bay Area (Stanford, Mills, Davis). Visit the website for her novel 13 rue Thérèse at 13ruetherese.com.

Kerry - A thoughtful and very well-written review - thanks. I do like novels that have ties to history like this, and the premise of this one interests me. I think, though, that if I do read it, I'll try to find it in old-fashioned ;-) paper format. I think I'd want to be able to see those graphics clearly.