I am ending my trip for Crime Fiction on a Euro Pass in room 411 at the Pera Palace Hotel where Agatha Christie is thought to have written Murder on the Orient Express. I invite you to join me at the hotel by clicking on the picture or the link above.

She in fact stayed at the Pera Palace many times between 1926 and 1932, and is supposed to have lost a diary there. 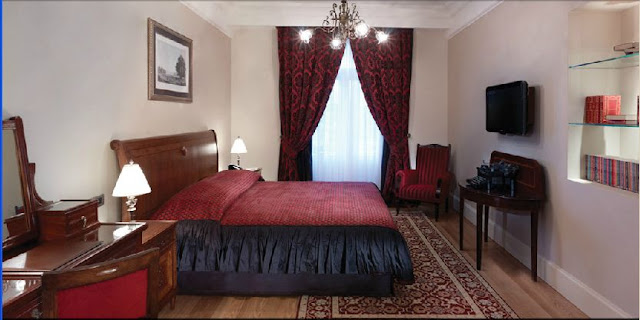 Not far from the recently renovated and re-opened Pera Palace Hotel is the Istanbul Railway station, the departure point for the Orient Express that Hercule Poirot had to catch so urgently.

I wrote about it last year, as follows, after my trip to Turkey.

I didn't get a chance to venture inside - always seemed to be on a bus when we were passing it, which we did several times.

This is the Sirkeci Terminal on the European side of Istanbul (Constantinople) which was opened in 1890 as the terminus of the Orient Express. It was designed by a Prussian architect and our guides pointed it out as a good example of Germanic architectural influence.

You might remember that in MURDER ON THE ORIENT EXPRESS by Agatha Christie Hercule Poirot has just arrived from Bagdad at the Istanbul terminal on the Anatolian side and meets his good friend the Wagon Lits controller. Poirot needs to get a berth on the Orient express but the train is full.

They cross to the other side of the Bosphorus (fortunately a short boat ride in view of HP's tendency to mal de mer) and go to the specially built Wagon Lits hotel, the Hotel Pera Palace, opened in 1892, to wait until it is closer to boarding time. Today the hotel has recently been refurbished. The tourist guides all take pride in mentioning Agatha Christie as one of its famous guests.

Oooh! Great entry for the grand finale! It's too bad about the Orient Express. It would have been nice to take a trip on it one of these days.

Kerrie: Thanks for a wonderful post to end the tour. It makes me want to go to Istanbul.

This was a fun reading challenge, Kerrie. I'm glad you came up with it. I was introduced to several writers who I will definitely be reading more of.

Love this final post. Very cool! My parents were among the many couples who took the inaugural trip on the "resurrected" Orient Express back in the early 1980s when it was run by Society Expeditions which went out of business about seven years ago.