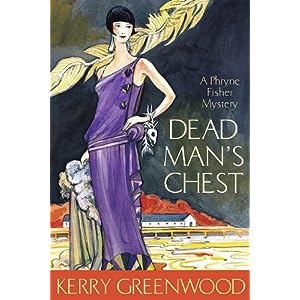 Read on my Kindle
e-book supplied for review by US Publisher Poisoned Pen Press. through NetGalley.com
US Publication date:  late 2010
ISBN-13: 978-1590587997
Australian publication date: October 2010
#18 in the Phryne Fisher series.

Publisher's blurb
Phryne Fisher needs a rest. It's summer. She packs up her family and moves to Queenscliff, a quiet watering place on the coast. Where she meets with smugglers, pirate treasure and some very interesting surrealists, including a parrot called Pussykins. What is the  mysterious Madame Selavy hiding? Where are the Johnsons, who were supposed to be in the holiday house?

Phryne has promised everyone a nice quiet holiday by the sea but when they arrive at the holiday house to find the live-in help missing, along with all the pantry supplies, the fun is just beginning. The house belongs to an anthropologist, and acquaintance really, who is travelling some where in the Far North of Australia. He has assured Phryne that the missing couple are very reliable, which makes their absence all the more puzzling. Phryne has with her her companion Dot, and her two foster daughters Ruth and Jane, and so they all decide to see if they can fend for themselves. They soon acquire another member of the household in the form of Tinker, a young boy loaned from the house next door. Her search for the missing Johnsons results in Phryne being mugged on her way home one night and so she becomes even more determined to solve the mystery. Tinker shows he has a real aptitude for sleuthing, Ruth delights in cooking for the family, and Jane is in seventh heaven when she manages to get into a locked room in the house.

The Phryne Fisher series are generally set in Victoria in the 1920s. In DEAD MAN'S CHEST a film is being made about a local legend, Benito's Treasure.


Pirate Benito Benita is said to have buried plundered Spanish treasure in a cave in the cliffs of Swan Bay in 1798. Other aspects of the legend entail Benita being caught in the act by the British navy and sealing the cave entrance with gunpowder.  more

In many ways the Phryne Fisher books are cozies. There is a development of characters from one book in the series to the next, although they can also be read as standalones. In DEAD MAN'S CHEST there is a range of credible and incredible characters and enough mystery to whet the appetite.

I should point out that, though I read this review copy on my Kindle,  it does not appear from Amazon that there is any intent of releasing this title on Kindle at the moment.
However if you have a Kindle, and are willing to review books, why not join Netgalley yourself and request a review copy from the Poisoned Pen Press listings? You don't have to have a blog to submit reviews - they have a very nice submission form too.

My review of the previous book in the series: MURDER ON A MIDSUMMER NIGHT

Kerrie - Thanks for this. I do like historical mysteries, so I always enjoy it when you review one of those. It's interesting, isn't it, how a book can be a good read, and not fit precisely into a particular sub-genre...

This sounds like an interesting series that I would like to read at some point. Thanks for sharing the order of the series...I'm a nut for reading series in order. I'll have to request the first book from the library!

I seem to have faltered a little bit with this series. I am not sure I have even read one this year. Time to request the next book in the series from the library again.

Why yes, I am because I can't believe it has been so long!

I love Greenwood's Phryne Fisher. I think of her as the grown-up's Nancy Drew. I had no idea that this one was out and found it through your recent Historical fiction post.