The Mercury Press, 2007, 171 pages, 9-781551-281353
When the raucous whining of snowmobiles wakes old Hughie Campbell on New Year's Eve, he reacts in anger, takes his .22 out from behind the stove, and takes a pot shot at the intruders. But shattering a headlight doesn't see them off, it brings them to his doorstep.
The fire that guts the Campbell farm early on New Year's Day is the second one in St. Thomas, Ontario, in only a few hours, and Sergeant Carl North can't help feeling that this is too much of a coincidence. There are two burnt bodies in the farmhouse kitchen. One is quickly identified as Hughie Campbell, so who is the other? North's offsider Constable Pete Heemstra remarks on how odd the placement of the bodies looks.
The other fire that night was at a strip club whose owner had been threatened by local bikie gang, the Pythons, who have controlling interest in a rival club. Coincidentally the neighbour who reported the Campbell farm fire has a son in the gang. Even without this gossamer thread, two fires in one night is just too much coincidence.

Sergeant Carl North, with one defunct marriage, and one almost finished, seems to be a person who attracts disaster. He's a bit of a lone wolf, one who doesn't always do things by the book, and we gather that in the past he has gained a reputation for pushing the boundaries. Nor does he devote the time to relationships that he should. His actions in SNOW CANDY put the people closest to him, as well as himself, in grave danger. He's impulsive, flawed, but very likeable.

SNOW CANDY demonstrates what a soft underbelly a small town can have once it is infested by the corrupting influence of a bikie gang. The corruption isn't evident in just strip tease clubs but can reach out into the police force itself. Gang leaders who will do anything to augment their own power place little value on the lives of others, even those inside their gang.

Read an excerpt from SNOW CANDY on the author's web site.

SNOW CANDY has been shortlisted for Canada's 2008 Arthur Ellis awards for best novel.
It is the second Carl North novel.
The first, BODY CONTACT, was published in 2006, and set in another small town, Belleford. Once again an excerpt is available online.

Many thanks to Terry Carroll for sending me a copy of the book. 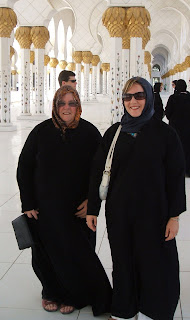 We went on on a tour of the great Mosque, which is nearing completion. It's a stunning accomplishment of fine architecture and remarkable craftsmanship. 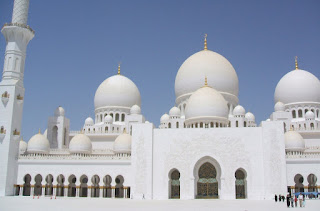