NO TIME FOR GOODBYE, Linwood Barclay

The morning Cynthia Bigge woke to find the house empty, her father, mother, and brother gone, would haunt her for the rest of her life. Because they never came back, disappeared off the face of the earth. A 14 year old rebel, she knew she was hard to live with, but why did they leave without her?
For twenty five years Cynthia has never lost hope that one day they would contact her, would ring, simply turn up just as they had vanished. Now she wants to go further than just wait. Happily married with a daughter of her own, she wants to solve the puzzle. What happened that night in May 1983 back in Milford, Connecticut?
And her story is just the sort of thing that people who watch the television show Deadline love. But three weeks after the show has screened there are still no results, so Cynthia decides to employ a private detective, and that's when things really start to move. Various events occur which make it seem that her family may still be alive.
Those who've called this a page-turner are not wrong. I loved the structure. Between the chapters dealing with the main story there are mini-chapters containing telephone conversations. These conversations provide a puzzle and at the same time clues to what really happened.
Highly recommendable. My rating: 4.7
Linwood Barclay is a Canadian author who published his first book in 1996, and a mystery series of 4 books in 2004. NO TIME FOR GOODBYE is a stand-alone. More details on his website.
~~~~~~~~~~~~~~~~~~~~~~~~~~~~~~~~~~~
Notes from Abu Dhabi

Kathryn has been introducing us to the relaxed life-style of an ex-pat's wife. (She'll miss it when she starts work teaching 3 year olds in a local school at the end of August)
Today we saw the Picasso exhibition at the sumptuous Emirates Palace hotel. 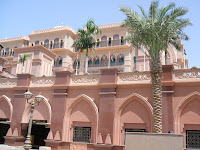 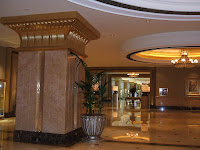 It's Kathryn's birthday today so we followed that up with coffee and cake in one of it's cafes. 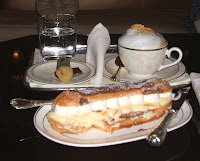 If you look carefully you'll see the gold sprinkled on top of the coffee.

Glad you liked this book, Kerrie-- I concur with your view. And thanks for pointing out he has written other books, which I hadn't realised.

Yikes! What's it like dressing in black in that hot weather? Re the temperatures, I have heard that elsewhere in the gulf area, locals celebrate by relaxing and enjoying feasts in tents when the temperature drops below 50 C!

Peter
==============
Detectives Beyond Borders
"Because Murder Is More Fun Away From Home"
http://www.detectivesbeyondborders.blogspot.com/

Once you get to take the pashmina(headscarf) and abeya (black crow outfit) off Peter, it is still 42-44 C but feels wonderfully cooler. It gets hotter in August (about 50 all the time)

that Picasso exhibition must be amazing. And that cake looks good!

I liked your review and your site. I will be looking for this book. I will post a link to your site on my blog.

I read this a couple years ago and enjoyed it too.