Summing Up my blogging year 2008

I set this blog up on the 2nd January 2008 with Best Reads of 2007 as my first post.
During the year I wrote 456 posts, read and reviewed 110 books, and at some time on New Year's Eve hit the 25,000 visitors mark (according to the big counter on the top right). There have been over 1100 comments on those posts, admittedly probably one third of those are me responding to comments by others.

I've been monitoring the site with various instruments including Sitemeter for the last 5 months. 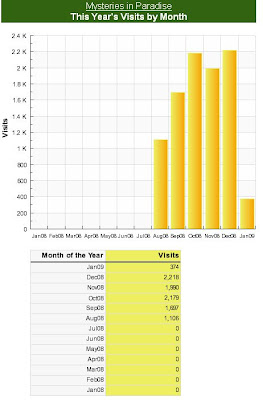 and ClustrMaps for nearly 12 months.

I found 90 other crime fiction blogs to follow and created Crime Fiction Journeys when displaying them all became too much for the main page of MYSTERIES IN PARADISE.
By following these blogs I feel I have become a contributor in a wider crime fiction reading community. I've certainly got to know a large number of other readers and reviewers and have joined other communities such as Crime and Mystery Fiction on FriendFeed.

I started participating in The Sunday Salon at the end of March and posted 37 times there during the year. From August I have participated in Pattinase's Friday's Forgotten Books and have contributed 17 times.
I created my own Agatha Christie Reading Challenge and to date have managed 6 books and a collection of short stories.

I was the host of the Carnival of Criminal Minds#18, participated in A Blog Advent Tour, and was featured in December on Matilda's Australian LitBlog Snapshots.

I've written a set of book review and blogging guidelines.

I created a list of favourite authors when I realised that there are some authors I would always read:
I've modified my blog quite a lot during the year, adding widgets and counters as it's grown, and even creating 2 separate blogs to accommodate a list of my reviews and my blog roll.

I've added a number of features:
The most successful activity by far has been What were your Best Crime Fiction reads for 2008? which will close in about 30 hours. So far there have been nearly 40 participants who've suggested nearly 400 titles. I'm putting them all on a spreadsheet and then going to come up with a list sorted according to how many times times they have been mentioned.

So, in summary, it has been a great year. Very eventful. Lots to keep me occupied. I never seem to run out of things to write about and other things to do.