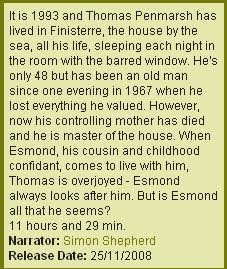 I listened to this as a download from Audible.com

According to Fantastic Fiction it was published in 1993, the same year in which the book is set.

Quite a long book, and I spent much of the time wondering if it was actually crime fiction, although in my heart of hearts I knew it was.

You know, for example, that nasty things have happened in Finisterre, the house Thomas inherited from his mother. People have died, including his father, his baby cousin Lizzie, and his wife Lillian. The room his father and Lizzie died in is referred to as the Death Room. It is not an accident either than Finisterre rhymes with Sinister.

The tension mounted in the last hour or so of the book, and I really began to question who was telling the truth. The eventual truth is horrifying, but you are still left wondering about which version to believe.

On his site Andrew Taylor says
"THE RAVEN ON THE WATER and THE BARRED WINDOW both explore the relationship between now and then: as a writer I'm fascinated by the fact that if you want to understand the present, you have to go back to the past. Both novels use a double narrative technique, in which the distant past and the recent past unfold together until they converge in the present. Both deal with the long shadows cast by old crimes.

THE BARRED WINDOW was widely reviewed as mainstream fiction. It is set in Cornwall and uses many of the conventions of the Gothic novel. One of its themes is the blurred dividing line which sometimes exists between predators and victims."

Read a few pages of THE BARRED WINDOW here. Listen to a sample here.

I haven't read as many of Andrew Taylor's books as I would like.
He was the winner of the CWA Cartier Diamond Dagger in 2009 for "sustained excellence in crime writing."
His blog site. Books listed on Fantastic Fiction.

Here are some mini-reviews from my database.

CAROLINE MINUSCULE (1982), my rating 4.2
William Dougal has had a nasty shock. When he went to see his lecturer in medieval languages Doctor Gumper, there he was lying inconsiderately on the floor of his study, not only dead but garrotted! William decided not to become involved in any way and removed any evidence of himself from the scene, and then departed, leaving it to the next person to discover the body to report the murder. Imagine his surprise when, as he leaves the college by the side entrance, a stranger joins him from the shadows, saying "I've been waiting for you. I'd like to have a chat". CAROLINE MINISCULE is the beginning of the Dougal series.

AN AIR THAT KILLS (1994), my rating 4.3
The bones of a baby are discovered in a disused privy as workmen demolish an old inn in a small market town on the England/Wales border in the 1950s. Newly arrived Detective Inspector Thornhill is called in to investigate what appears to be an old Victorian murder case. This is the first of Taylor's Lymouth series. It reminds me of Dorothy Simpson's Inpector Thanet series. Thornhill and Thanet have a lot in common. A fairly placid cozy.

DEATH'S OWN DOOR (2001), my rating 4.5
#6 in Taylor's Lydmouth series. Edith, wife of D. I. Richard Thornhill of Lydmouth, returns to nearby Trenalt for the funeral of Rufus Moorcroft, someone she knew when she was much younger. The funeral draws a number of her 'old crowd' back together, first to the funeral, and then as part of the investigation surrounding Moorcroft's death. The plot thickens when the elderly and decidely odd Cicely Caswell is found dead on the railway line, and events that occurred decades before become important. Edith has a little fling with a former flame, set against the larger backdrop of her husband's much more serious affair with Jill Francis, editor of the Lydmouth Gazette. (I wish I'd read this series in order though)

CALL THE DYING (2004), my rating 4.4
Love and need make unexpected bedfellows, and both are blind. As the grip of a long hard winter tightens on Lydmouth, a dead voice calls the dying in a séance behind net curtains. Two provincial newspapers are in the throes of a bitter circulation war. A doctor finds his Nemesis and an office boy loses his heart. In Lydmouth, it is the year when the fog is particularly bad - and when the rats are fed on bread and milk, a gentleman's yellow kid glove is mislaid, and something disgusting is happening at Mr Prout's toyshop. It's also the year when Jill Francis returns to Lydmouth as editor of the Gazette. There's no pleasure left in the life of DCI Richard Thornhill. Only a corpse, a television set and the promise of trouble to come. 7th in the Lydmouth series. Quite tightly written.

Kerrie - I love crime fiction where it's hard to tell who's telling the truth and who's not. It makes for so much suspense, and keeps me guessing. It's especially effective, for me, when all of the "versions" of what happened seem plausible. Thanks for this review.

Kerrie, I just had to put this on my list!

Andrew Taylor is a fantastic writer. I too love the "unreliable narrator" and the crime from the past that has reverberations in the present. I just finished reading his "Bleeding Hearts Square," which is both the uncovering of what happened to a person who has disappeared in the past and the growth of a woman who leaves her abusive marriage looking for her father. I strongly recommend it.