Then can I point you to a new novel by blogging friend Dorte Hummelshoj Jakobsen?
Dorte began publishing flash fiction and has this week published THE COSY KNAVE, an e-novel that is available from both Amazon and Smashwords.

The vicious attacks begin when the prodigal son of Knavesborough, Mark Baldwin, returns to the sleepy village after forty years in Argentina, fully equipped with fame, fortune and effeminate butler.

Small wonder that the spiteful nosey parker Rose Walnut-Whip is stabbed, but how could the murderer get away with shattering the perfect, English tearoom idyll in front of twenty villagers?

Constable Archibald Penrose is in dire need of assistance as his superior, DI Mars-Wrigley, is preoccupied with England´s chances in the football world cup. Penrose´s enthusiastic fiancée, the mint-new librarian Rhapsody Gershwin, is more than willing to help as she sees this as Penrose´s route to promotion (and a welcome raise).

As she is the vicar´s daughter, Rhapsody´s treasure trove of local knowledge may come in handy, and to be perfectly honest, the young sleuth may also be a tad curious. And of course the crimes do not stop here. A dangerous criminal is on the lose in Yorkshire. Can the young couple stop the perpetrator in time? 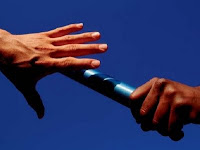 Please make sure you check the post on Dorte's blog to see which way she would prefer you to buy it.

Passing the baton on

Today's question was posed by Karen at How Mysterious
How would you introduce your detectives?


Village Constable Archibald Penrose first appeared in a Christmas story on my blog under the name Constable Prewitt. The poor, rather inexperienced officer had to solve the murder of Santa all on his own. Penrose is still young and inexperienced, but he is an honest and diligent policeman who struggles to learn the ropes. Besides, he does his best to live up to the very different expectations from people around him. Not quite easy as his superior is a silly twit, his aunt is very possessive, and his fiancée is more ambitious than he is.

And Rhapsody Gershwin? Archie thinks she is a gem among women, but some of the words that spring to my mind are enthusiastic and practical. As a librarian, she has learnt to sort and arrange things, and besides she is fairly curious - all useful qualifications for an amateur sleuth. As a vicar´s daughter she is also well-behaved and has strong principles, but it soon dawns on her that when you are on a case, you may have to try unusual methods in order to get results.

Of course Constable Penrose believes he is the detective and Rhapsody is his sidekick. I am less sure, but read the story if you really want to know.

Tomorrow's question:
What kind of plot can we expect in "The Cosy Knave"?
will be answered at Mysteries and More from Saskatchewan

Thanks a lot for grabbing the baton and sending it off north :)