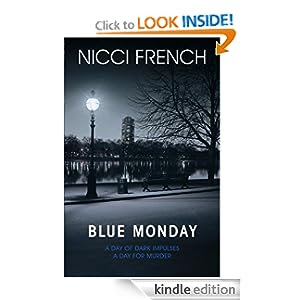 Publisher's blurb for BLUE MONDAY (Amazon)
Monday, the lowest point of the week. A day of dark impulses. A day to snatch a child from the streets ...The abduction of five-year-old Matthew Farraday provokes national outcry and a desperate police hunt. And when his face is splashed over the newspapers, psychotherapist Frieda Klein is left troubled: one of her patients has been relating dreams in which he has a hunger for a child. A child he can describe in perfect detail, a child the spitting image of Matthew.
Detective Chief Inspector Karlsson doesn't take Frieda's concerns seriously until a link emerges with an unsolved abduction twenty years ago and he summons Frieda to interview the victim's sister, hoping she can stir hidden memories. Before long, Frieda is at the centre of the race to track the kidnapper. But her race isn't physical. She must chase down the darkest paths of a psychopath's mind to find the answers to Matthew Farraday's whereabouts. And sometimes the mind is the deadliest place to lose yourself.

It seemed to take a while for BLUE MONDAY to get going, for the main characters and the major stories to be put in place.

BLUE MONDAY begins with an unsolved abduction over twenty years ago, when on their way to a sweets shop after school, nine year old Rosie loses her 5 year old sister Joanna. It happened on a Monday in November.


Rosie ran to the corner where she had last seen Joanna and stared around, squinting. She called again, though her voice was drowned by a lorry. Maybe she had crossed the road, had seen a friend on the other side. It wasn’t likely. She was an obedient little girl. Biddable, their mother called her.

‘Can’t find her?’ Hayley appeared at her side. ‘She’s probably gone home without me,’ said Rosie, aiming at nonchalance, hearing the panic in her tone.

The horror of Joanna's disappearance is well described, as is the impact on both Rosie's life and that of the police investigator who fails to find her.

And then we jump twenty years and meet Freda Klein, psychotherapist, insomniac, walking the streets of London in the wee hours of a Monday morning. It is also November.
Later on the same Monday Alan Dekker has a panic attack and promises his wife he will go back to the doctor to get a referral to a psychiatrist. Dekker becomes Frieda's patient on the following Monday.

Readers are introduced via italics to another character who is watching children in a school playground.
We also meet Detective Constable Yvette Long and her boss Detective Chief Inspector Malcolm Karlsson.

The novel is nearly 25% done when five year old Matthew Faraday disappears, and the disparate strands of themes, events, and characters begin to converge. It seemed to take ages to get to this point, but in retrospect it seems that French is populating a huge canvas the main characters of which will reappear in subsequent titles.

As I commented in a post earlier this week about "missing children" crime fiction, this is a theme many novelists have explored. It felt a bit as if French was determined to give the reader something different to think about. For example, there are passages in the second half of the novel where we see the situation through Matthew's eyes. There are a couple of plot twists in the latter part of the novel, but for me both of them were a bit predictable.

I do like the police team of Long and Karlsson and the way Karlsson in particular meshes with Freda Klein. I will interested to see where the next in this series goes.

Kerrie - Thanks for this well-done review. I'm interested in seeing what happens with this new series, too. You raise the good question, too, of how much time the author should spend, as you say, painting the canvas. There's an interesting balance there between giving enough background to understand an event and giving too much.

Nice review, Kerrie. I made the same point about the branding in my Euro Crime review. I like these authors but I think in this book the commercial vs good-story balance was teetering a bit!

Hmmm, I am not sold especially after hearing it may be a series and 8 books.

I really love this genre because majority are stand alones.

Maybe I will read an older one, do you have a favourite, I have only read one and enjoyed it. Beneath the Skin.

Thanks Maxine. I have linked to your review now. I think there was some attempt to exploit the concept of "Monday" with many of the events occurring on that day, but my fear is that to continue the links to a particular day of the week will become a bit formulaic. I suspect the name of a day in the title is going to be a sort of "where are we in the series" rather like Sue Grafton's Alphabet series