Captain Bruno Courreges goes by the grand title of Chief of Police, though in truth he’s the only municipal policeman on staff in the small town of St Denis in the beautiful Perigord region of south west France. Bruno sees his job as protecting St Denis from its enemies, and these include the capital’s bureaucrats and their EU counterparts in Brussels.

Today is market day in the ancient town. Inspectors from Brussels have been swooping on France’s markets, attempting to enforce EU hygiene rules. The locals call the Brussels’ bureaucrats ‘Gestapo’ and Bruno supports their resistance. What’s more, here in what was Vichy France, words like ‘Gestapo’ and ‘resistance’ still carry a profound resonance.

When an old man, head of an immigrant North African family, is found murdered, suspicion falls on the son of the local doctor, found in flagrante playing sex games surrounded by Nazi paraphernalia. But Bruno isn’t convinced, and suspects this crime may have its roots in that most tortured period of recent French history - the Second World War, a time of terror and betrayal that set brother against brother. 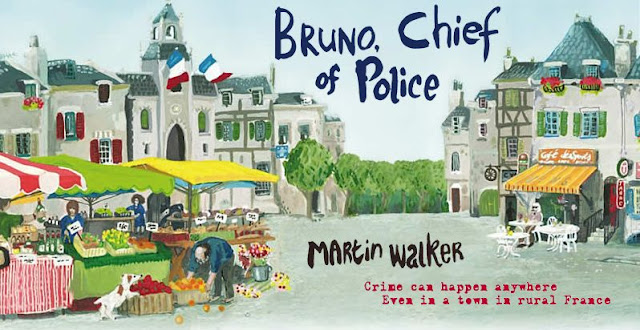 When I reviewed THE DARK VINEYARD recently, I was really determined to read the first in the series, and I'm glad to say that it has lived up to my expectations of being an excellent read.

In these days of large city living and policing that seems super organised, rationalised, and even institutionalised, it seems nice to believe there is, somewhere in the world, the sort of rural policing that happens with Bruno, the Chief of Police in St. Denis. Bruno is what you would like every policeman to be, part of his community, aware of its members, a human being who just happens to be a policeman.

Bruno is devoted to "his little corner of paradise." He ensures that his community recognises its past, respects its elders, welcomes incomers, and encourages its young people. That's why it is such a shock to think that the death of elderly Hamid al-Bakr could possibly be a racist killing. In working out what has happened, at the same time as tamping down possible flare-ups, Bruno show his real worth as a policeman. We get glimpses too of Bruno's personal and social life, of the way he contributes to the whole social fabric. In solving the crime Bruno demonstrates what a good detective he really is.

This is an excellent start to the series and I recommend it to you particularly if you like cozies.
I kept thinking of what, in my reading past, the story reminds me of - perhaps a combination of Miss Read, Don Camillo, and Miss Marple?

Review on EuroCrime by Maxine Clarke

Martin Walker's Bruno, Chief of Police site is delightful too.

Kerrie - Thanks for your fine review. I'm glad you liked this one; so nice isn't it when you decide to go back and check out the first book in a series - and find out it's a really good one :-).

I also enjoyed this one thoroughly. As you say, it is nice to believe Bruno might exist somewhere.

This book has been on my TBR list for quite awhile, and now it'll go further up. My library has it so the problem of getting it is solved.