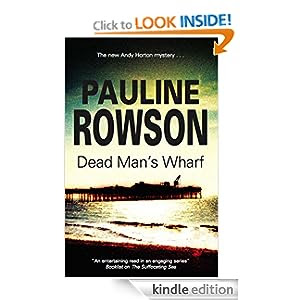 DI Andy Horton and Sergeant Barney Cantelli are called to a nursing home where an elderly resident, suffering from dementia, claims she's been attacked by an intruder. Horton is ready to dismiss it as senile ramblings until he discovers that her room-mate has died, the dead woman's belongings are missing and her son, convicted for armed robbery, has been found dead in his cell.
As if this isn't enough, Horton also has to deal with a series of threatening telephone calls to a television personality, and a mother's conviction that her son's death on Christmas Eve was no accident.
Soon, to his surprise, Horton finds he is caught up in a complex investigation that has far-reaching international implications.
With the pressure on to find a killer, and hampered by his belief that his bosses are lying to him, Horton discovers that he's stepped into a web of intrigue, deception and corruption that stretches back into the past.

This is #4 in Rowson's Andy Horton series and the third I have read. Rowson is a clever writer able to develop a complex plot from seemingly simple roots. The plot keeps branching, element upon element being added, and Rowson does a good job of keeping tabs on them all.

Early in his investigation of the threatening phone calls case, Horton's immediate superior DCI Bliss is seconded to the Performance and Review team. Horton will be in charge with a new DC, Harriet Lee, assigned to help him. Horton is suspicious that Lee is not what she seems.

Running through the background are two themes: Andy Horton's desire to have some access to his daughter, and his need to know what happened to his own mother who disappeared when he was young. It turns out that the dead woman in the nursing home is a familiar name, someone who knew his mother.

Pauline Rowson has the ability to make you want to keep reading, to find out the answers to the growing pile of questions. Those who enjoy British crime fiction will enjoy this series. The Portsmouth setting gives it a unique flavour.

Kerrie - Thank you for reminding me of this series. It's one I've meant to try and simply haven't yet. Time to change that.

"able to develop a complex plot from seemingly simple roots. The plot keeps branching, element upon element being added, and Rowson does a good job of keeping tabs on them all." First, I'm jealous. I don't think I could ever develop a plot in this manner. Second, I must check this out.

You have also tempted me :)