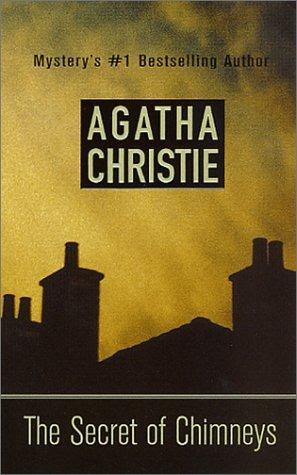 CHIMNEYS begins in Bulawayo, Africa, when Jimmy McGrath runs across his old friend Anthony Cade. Jimmy has in his possession a manuscript that needs to be delivered to a publisher in London by a particular date. He also has a bundle of incriminating love letters that he wants returned to the person who wrote them. He can't take them himself as he on the hunt for some gold.
Cade agrees to take on both tasks, and travels to London by steamer in the guise of James McGrath.

One of elements of this story is political intrigue related to the kingdom of Herzoslovakia in the Balkins. Its last king was assassinated seven years earlier and the kingdom has been a republic ever since. However the heir to the throne is attempting to claim it back. The Herzoslovakian links in the story become important because the manuscript is the memoir of a former Prime Minister.

The action moves to London and then on to Lord Caterham's country house Chimneys, where a murder takes place. Christie's search for a suitable protagonist continues. THE SECRET OF CHIMNEYS marks the appearance of yet another, this time a Scotland Yard detective, Superintendent Battle. He is assigned to this case because of the importance of Chimneys, which is apparently often used as a pleasant meeting place for affairs of state. We are told Battle is a man of "ripe experience", and there certainly seems an attempt to give him a modicum of intelligence, and to allow him at times to be a step or two ahead of others in his understanding and intuition. On the other hand he is often poker-faced and expressionless.

Other people who will appear in later novels are Caterham's daughter Eileen (Bundle) and Bill Eversham, a young clerk from the foreign office. Colonel Melrose makes a cameo appearance as the Chief Constable although in later stories and novels he will be the Coroner.

The novel is possibly set I think in "real time". There is a reference to European nations rebuilding for the past 7 years, which seems to indicate a passage of time since a cataclysm, possibly the Great War. There is however no other reference to those events. There is also a reference to the previous, assassinated, queen of Herzoslovakia having claimed Romanov connections.
Perhaps I am mistaken and the setting is actually in the period just before World War I when the Balkans was in great turmoil. Another point in favour of this earlier period is the reference to Bertillon measurements as a means of identifying a person. These were measurements taken of various parts of the body: a system in common use in France in the late 19th century.

This is a novel in which many characters are not who they seem to be, beginning with Anthony Cade who poses as Jimmy McGrath. There are many who are leading a double life, and it becomes difficult for the reader to decide who is on whose side.

There are elements in THE SECRET OF CHIMNEYS that really don't work all that well. The idea of an arch criminal which first appeared in THE MAN IN THE BROWN SUIT makes an
appearance, as does the idea of conspiracy and secret societies, in this case the Society of the Red Hand. The Koh-i-noor diamond, part of the British Crown Jewels since 1858, makes a puzzling appearance.

This is also a novel in which Christie shows that she doesn't really care if the reader has all the information, that we should expect that she will keep cards up her sleeve to be revealed in the final denouement. The novel is full of red herrings, and at the end we ask ourselves if we had enough information to solve the mystery. A pattern that is becoming a trademark in her novels even by this, the 5th one, is that in the final pages the cast of characters will be gathered and all will be revealed.

I wouldn't rate this as one of her best novels, although at the time of publication it was well received. It feels rather over-populated with characters, heavily reliant on ideas of conspiracy, intrigue and political upheaval, with some romantic elements.

My review of the graphic novel made of THE SECRET OF CHIMNEYS.

I popped this up even if you didn't mean it to be here because I have been waiting for eight months for an Agatha Christie to turn up here. Thanks.

I agree with your views and rating. It's a fun book, but really it wouldn't still be in print if its author hadn't written many other, much better, mysteries.

My review felt a bit woolly after I had written it Martin. When do you think it is set? I was a bit disappointed with how bad the book/story really was. I kept seeing Anthony Andrews as Cade too, and that didn't help. I think at that stage Christie really couldn't decide between writing murder mysteries, espionage thrillers or romances. I don't think she was particularly good at either of the latter.

My recollection, though a bit hazy, is that Chimneys was set in the early 20s. I see it as very much part of her apprenticeship as a writer. She never lost her interest in writing thrillers, but the classic whodunit form suited her gifts as a writer far better.

That's the period I first thought Martin. But then the idea of the Balkans as a hotspot in the mid 20s, which I don't think it was, made me think she had actually meant to set it before the war.