I've been discovered twice this week, so I thought I'd write about them.

On July 14 I was contacted by Bookblips to say they had me listed and I had a good rating.

I'm here. If you want to check who is on their listing go here. I've discovered quite a number of familiar names on the list.

Then on July 16 I began to get an amazing number of visitors, for this little blog anyway.
The little bean counter went wild! You can see the effects here. 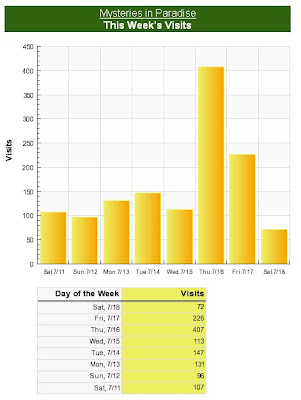 The source of all this activity was Metafilter, in particular the following entry:
In 1947, Thomas Ley, a virulently sectarian, pro-hanging Australian politician, died in Broadmoor Criminal Lunatic Asylum, where he had been sent after being sentenced to death for murder. It was probably not his first.

I´m one of your frequent visitor ... congratulations!