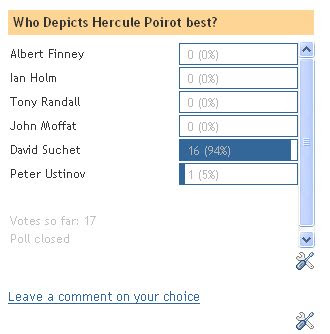 My recent poll asked which actor best depicted Hercule Poirot. And somewhat predictably David Suchet won hands down as you can see.

Novels and short stories featuring Hercule Poirot span an incredible period of time 1920 - 1975 (although some short stories were published after that).

Hercule Poirot in Literature is worth checking on Wikipedia - someone has done a great deal of work in creating the lists there.

There is also a lovely website devoted to him, in addition to the official Christie site.

Christie sent Poirot and his "little grey cells" into murder-solving action in 33 novels and 51 short stories.

David Suchet has been portraying Hercule Poirot for 20 years now, and a newspaper article earlier this year alerted us to the fact that Suchet is running out of material to film. It seems that the final CURTAIN, Poirot's last case could be as little as 2 years away.

poor Peter - my lonely vote for him looks a bit sad. But it's still my favourite Christie flic

I am not nearly as fond of Poirot as of Miss Marple. Besides I was probably away when you put up this poll. In my mind Suchet IS Poirot, however, as he is more or less the only one I have seen in the role.

Shame on me - I didn't vote. Mine would have been with Bernadette and Peter Ustinov. I guess I didn't feel the urgency like I did for Miss Marple. Of course I was in the minority there too. I voted for Helen Hayes.

I still enjoy David Suchet's version. That's sad that he is running out of material. We'll just have to watch re-runs.

I think Peter Ustinov did a really good job too Bernadette, and before David Suchet came along, he really did fit the bill.
Sometimes I get annoyed with Suchet's portrayal, particularly the mincing walk. There are times in the books where Poirot displays an athleticism that Suchet couldn't possibly manage.