We are off whale watching today. When South Australia was founded 170+ years ago, the area was well known for the abundance of sperm whales. There were whaling stations mainly founded by American whalers well before the colony was founded. Their activities during the early 19th century saw the decimation of whale numbers.
In the last 20 years or so, the whales have come back, and this time of the year they come close to our shores.

I've had a fairly active blogging week as you will see. 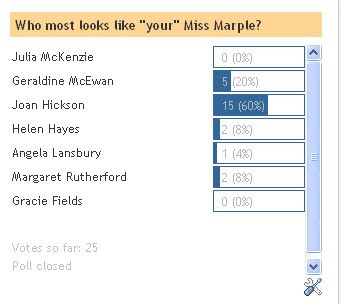 As you can see Joan Hickson was the popular choice.
I must admit that surprised me. I expected more to choose Geraldine McEwan.

I have been wondering whether Julia McKenzie will come to regret her decision to become the next. I bet she never imagined the public analysis of her performance that has just begun.

How about this comment in the NYT: "But oddly — and disappointingly — it’s Ms. McKenzie who seems older in the role. Ms. McEwan’s Marple could come off as dotty and cloying, but that was part of a vigorous strategy to rout wrongdoers and set the world straight; she was a steel fist in a white lace glove. In Ms. McKenzie’s quieter portrayal, the character seems less fragile, but also less determined, and therefore less engaging. Where Ms. McEwan was skeptical, Ms. McKenzie is wistful; dought has turned to doubt."

So this week's poll asks you to choose among 6 contenders for the best depiction of Hercule Poirot. I discovered that there have been many actors who have played HP.
I'm sorry if I've left your favourite out. Do drop in and vote and comment.

I'm always impressed with how much you get done in a week. Fun post. Thanks.

Did you go down to Victor for whale watching?

Color Online thanks for dropping by.

We saw 3 whales we think Marg. A pair off Middleton and then a really big one off Granite Island.

Kerrie - So glad you saw whales. I hear there are lots of Orcas feeding on rays somewhere down there:)

You do manage to get lots of blogging done in a week, it is quite impressive. I read "Echoes From The Dead" this week but won't get to the others before the awards are announced. Have a good week!