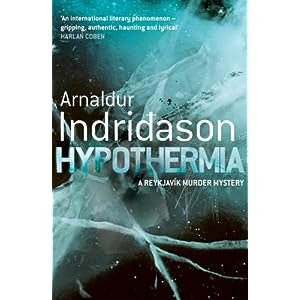 When a woman hangs herself in her lakeside retreat, the friend who finds the body is convinced that while she was depressed she was not suicidal. Erlendur on the other hand wants to understand why she did it.
It appears that Maria has never recovered from the death of her mother a few months before, or perhaps the drowning of her father when she was barely a  teenager. She has been consulting psychics and is convinced her dead mother is leaving messages for her.

Erlendur is visited by the father of a university student who disappeared nearly two decades before. The visits have become annual but now the old man reveals he has only a matter of weeks to live. Erlendur decides to make one last effort on the cold case and finds out something that he missed at the time.

Erlendur's own narrow scrape with death, when his younger brother disappeared, is never far from his thoughts. He tells his daughter Eva Lind that no day passes without him thinking about it. Eva Lind on the other hand wants her parents, estranged for nearly all her life, to get back together. Erlendur is convinced that it will never happen.

This is an engrossing, many stranded novel, delivered in Indridason's typically spare style. It progresses our understanding of what makes Erlendur tick, at the same time allowing the new reader to treat the book almost as a stand alone. Indridason gives sufficient backstory I think, although that is always hard to judge when you have read most of the offerings in a series.

It would be tempting to simply see HYPOTHERMIA as an Icelandic contribution to the police procedural genre, but in Erlendur we have a detective who is driven by more than the need to solve a case. In fact in this novel he is often operating outside the team. His colleagues know he is working on something but not what. He calls in favours and pursues threads because of hunches. Even when working with a colleague he will go beyond the agreed procedures.

Other reviews:
HYPOTHERMIA is short-listed for the 2010 CWA International Dagger

TAINTED BLOOD (JAR CITY), rating 4.9
A man is found murdered in his Reykjavik flat, a cryptic note left on his body. Erlendur, Detective Inspector with the Reykjavik police investigates. The investigation of the dead man's past reveals 40 year old accusations of rape and the murder begins to reach out like an octopus into Iceland's past and its present. We learn much about Icelandic society, and about how police investigations are carried out. There are some interesting side plots such as Erlendur's relationship with his drug-addicted daughter Eva Lind, his son Sindri Snaer, and his retired colleague Marion Briem. The investigation moves at a good pace and raises some interesting ethical questions.

SILENCE OF THE GRAVE by Arnaldur Indridason, rating 5.0
Building work on the outskirts of Reykajavik (Iceland) uncovers a body possibly buried alive during World War Two. Erlendur and his team are called in to investigate and try to uncover the truth while a team of archaeologists slowly and painstaking exhume the skeleton. Those who still live in the area tell of a young pregnant woman who disappeared in the war, but is it her? An elderly dying man talks of the green woman who was crooked. At the same time Erlendur is re-living his past - his daughter Eva Lind lies in a coma in the local hospital after a miscarriage and an old woman asks him why he is carrying a young boy around with him. The construction of this novel is intricate and it is almost impossible to solve the mysteries until the very end. Indridason draws into it a fascinating local legend about an orgy at the local gasworks on the night Halley's comet nearly struck the earth in 1910. Translated into English from Icelandic in 2005.


VOICES, Arnaldur Indridason, rating 5.0
The doorman at a Reykjavik hotel who doubles every year as Santa at Christmas parties in the hotel is found dead by one of the hotel maids, stabbed to death, in his squalid basement room. Christmas is fast approaching and the detective Erlendur is confronted by the problem of how or even if he is going to celebrate Christmas. Is there anything to celebrate? Strangely he moves into the hotel while the investigation of the murder is carried out just feeling he can't go back to his flat. This is Indridason's 3rd novel to be translated into English. It was originally published in 2003 and made it into English in 2006. Erlendur of course eventually solves the murder mystery but along the way we learn a lot about the ghosts of his own past, and gain insight into his relationship with his drug-addicted daughter Eva Lind. And even in the last 10 pages we are still juggling candidates for the killer.

THE DRAINING LAKE by Arnaldur Indridason, rating 4.7
After an earth tremor, the water level in an Icelandic lake begins to drop as water drains out through fissures in the lakes bed. Eventually it drops low enough to reveal the skeleton of a murder victim, probably there for a number of years and anchored to a piece of Russian radio equipment. The search for the identity of this person is a fairly lengthy and tedious process but murders and missing persons are pretty rare in Iceland where everybody knows everybody. Woven into the murder investigation is the story of idealistic young Icelandic socialists, party members chosen to be educated at university in Leipzig in East Germany, and then also more about Erlendur's own family and his children who flit in and out of his life. Originally published in Icelandic in 2004, the 4th of Indridason's books to be translated into English.

Kerrie - Thanks for this excellent review. I need to get to know Erlendur, that's for sure, and it sounds like this is fabulous instalment in the series.

Lovely review, Kerrie. It is a wonderful book, I think.

Kerrie it's almost next in my list to read. Glad you rate it that high.