Book Review: UNTIL THY WRATH BE PAST, Asa Larsson 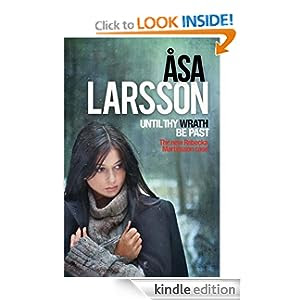 In the first thaw of spring the body of a young woman surfaces in the River Thorne. Rebecka Martinsson is working as a prosecutor in nearby Kiruna. Her sleep has been disturbed by haunting visions of a shadowy, accusing figure. Could the body belong to the ghost in her dreams?
Joining forces once again with Police Inspector Anna-Maria Mella, Martinsson is drawn into an investigation that focuses on old rumours about the disappearance of a plane carrying supplies for the Wehrmacht in 1943. Shame and secrecy shroud the locals' memories of the war, with Sweden's early collaboration with the Germans still a raw wound. And on the windswept shore of a frozen lake lurks a killer who will kill again to keep the past buried for ever beneath half a century's silent ice and snow.

I'm really regretful that I have read only 2 of Asa Larsson's four novels, and in particular have missed reading THE BLACK PATH (see Euro crime review by Maxine Clarke), because the impact of the events of the third novel are frequently referred to in UNTIL THY WRATH BE PAST.

The hook that gets the reader into the novel is a powerful one.


I remember how we died. I remember and I know. That's the way it is now.

17-year-old Wilma Persson and her boyfriend are trapped while diving beneath the ice of Lake Vittangijärvi, looking for the wreck of a Nazi transport airplane that crashed there during the War. The story opens with Wilma as the narrator and she continues to make frequent appearances throughout.
When Wilma's body is first discovered in a nearby river, it is assumed her death was an accident. No-one had known where the young couple were diving. When forensic evidence shows that Wilma did not die where her body was found, Rebecka Martinsson decides to take over the investigation herself.

I was never very clear about what the transport plane contained but it was enough to push locals, who are ironically relatives of Wilma's, to make sure it was not discovered.

Wilma ensures Rebekah Martinsson's involvement in the investigation by appearing to her in what seems to be a dream.


I go to visit the prosecutor. She’s the first person to see me since I died. She’s wide awake. Sees me clearly when I sit down on her bed. Her farmor is standing in the bedroom as well. She is the first dead person I’ve seen since I died myself. The first dead person I’ve ever seen, in fact. The grandmother eyes me up and down. You can’t just come and go as you like here, stirring up trouble. The prosecutor has a stern protector. I ask permission to speak to her granddaughter.

UNTIL THY WRATH BE PAST is about a lot more than a murder mystery. It is also about how local people had behaved 60 years before during the war; about relationships within a particular family; about how Inspector Anna-Maria Mella, mother of four, is coping with her job; and about Rebecka Martinsson trying to maintain her independence in Kiruna when her lover has gone back to Stockholm.

Allowing Wilma to narrate events, and even at times to go back into the past as a character remembers, does feel a little odd, and requires a degree of tolerance from the reader. It introduces a paranormal element into the book which perhaps we could have done without.


Hjalmar is skiing through the forest. The afternoon sun is warming everything. There are big balls of new snow in the trees, but it has started to melt and drip. I’m sitting in the birch trees among all the watery pearls, watching him. Moving from tree to tree. Being weightless, I can perch on the thinnest of twigs. In winter they are black and the frost makes them straggly.

Other reviews
Also reviewed on this blog: THE SAVAGE ALTAR

There are plenty of female Swedish crime writers. I think Camilla Läckberg is the most succesful and the most well-known outside Sweden.

But Åsa Larsson is my number one favorite. I am glad you liked her books as well.

Kerrie - Thanks for this fine review. I am very, very eager to read this one, as I've become quite an Åsa Larsson fan. I'm glad you liked this.

The technique of having a dead person narrate portions of a book is interesting. Some readers will refuse to suspend their disbelief that much. However, being a mystery fan itself involves tremendous suspension of disbelief: in book after book in a series the "sleuth" finds herself in interesting and dangerous situations. Does anyone live like that?

The "dead person" theme was done well in The Lovely Bones and has been imitated too many times since! The idea, for example, is used in an upcoming Swedish crime novel by Mons Kallentoft (Midwinter Sacrifice). Here I think the author just about gets away with it, bearing in mind the book was originally written in Swedish some time ago before being translated, so the device was not then common.

The contents of the plane - to me, the power of the book as gradually revealed, is not so much what they were as what one character thought they might reveal - though I think there is more than a hint towards the end of what they are.

i have all three books by Larsson, but haven't heard of this new one. I have to read the second and third books now to get ready for this 4th. Thanks so much for the review! She is a good writer, isn't she?