Review: IF THE DEAD RISE NOT, Philip Kerr 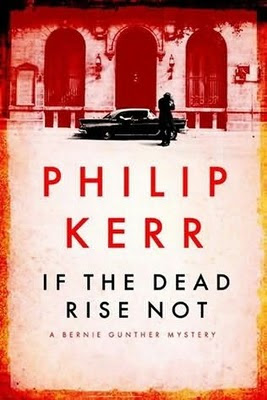 Set in Berlin in 1934,in a Germany preparing to host the Olympic Games in 1936. An American Olympic committee is in Berlin supposedly assessing whether there should be a US boycott of the Games because of racial practices in Nazi Germany. Hitler's determination to show Aryan supremacy is already having effect - Jews are being excluded from public office, sporting clubs, and even those who seem most German are having to take steps to hide their Jewish bloodlines.
Because Germany is prepared to spend vast sums on the construction of the venues for the Games, it is also a golden opportunity for overseas entrepreneurs to make money.
Ex-homicide detective with the Berlin Criminal Police, Bernie Gunther, works at the Adlon Hotel as a house detective. The discovery of the body of a German businessman connected with the construction industry sparks an investigative trail for Bernie, and the final resolution will not happen for another twenty years, nor will it take place in Berlin.

The main story reminded me of THE IRON HEART by Australian author Marshall Browne which I read earlier this year. Admittedly THE IRON HEART is set in Berlin 5 years later, but the danger of being Jewish in Nazi Germany is well described there too.

If I have a bone to pick with IF THE DEAD RISE NOT it is with Philip Kerr's decision to set the tying up of the threads in Cuba twenty years later. IF THE DEAD RISE NOT is the sixth in the Bernie Gunther series but I haven't read any others. The series has been published over a period of twenty years. From my research I believe the first, MARCH VIOLETS, was set in Berlin in 1936. It seems to me that what Kerr has done is weave threads in Bernie Gunther's life from the early 1930s to the mid 1950s through each of the books. (Perhaps someone reading this post will tell me how correct I am).

For me, the technique didn't quite work. When we got to Cuba, I just wanted it all to finish, to finally see how he would round it off. I was much happier back in Germany in 1934. As I read the latter part of the book I became aware of things I might have missed out on by not reading other books in the series. There were allusions and quickly told snippets of Bernie's history, which I thought were there to fill me in on the "back story".

Thanks, Kerrie, for your review. I always learn from your views : ). I've read a bit of Kerr, but not this one, and I appreciate your sharing this with us.

I must say Kerr is on my 'read when retired' list due to someone else telling me I really had to read all the books, in order, to really 'get it'.

I read the first three Gunthers years ago and have been back to re-read March Violets and A Pale Criminal recently.
A Quiet Flame number five is set in Argentina 1950, but has a 1932 backstory and this is the best part of that book.
I haven't read The One From The Other {number 4} yet but I don't think all the allusions and snippets referring to the war years are covered in that either. I think Philip Kerr has left gaps in Bernie's history to perhaps be filled in by another book.

May i know what is your favorite book ?