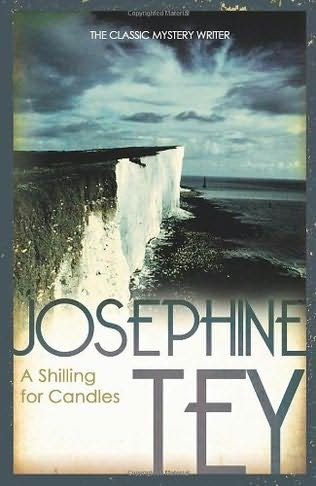 The discovery of the body of a popular screen actress washed up on a beach on the southern coast of England sparks an investigation headed by Scotland Yard's top detective, Inspector Alan Grant.
Christine Clay's death hits the headlines, has a global impact, "society" dusts off its mourning blacks in hope of an invitation to her funeral, and yet what comes out is that almost no-one knew who she really was. A clairvoyant claims to have foretold her death, and her estranged brother seems to have disappeared.

This was the second in Josephine Tey's Alan Grant novels. You are probably familiar with other novels such as THE FRANCHISE AFFAIR, and THE DAUGHTER OF TIME.

I must confess to being a bit disappointed in the novel. I found the central threads very difficult to focus on and really thought there was rather too much going on. The writing is quite complex, full of little mental pictures because Tey has a graphic style, full of adjectives and adverbs, and the end effect is to slow the reader down. I found myself constantly re-checking what I had just read. In addition the novel felt a bit over populated with characters, and littered with red herrings and dead ends.

Sometimes we talk about whether a novel has "stood the test of time", and I think perhaps what I found is that A SHILLING FOR CANDLES was written for an audience a little different to today's.
On the back cover of the book is a quote from the Boston Globe: "The unalloyed pleasure of watching a really cultivated mind in action."
Maybe that is the clue to the difference: the complexities in this novel come not from the intermingling of threads as in a modern crime fiction novel, but from the language itself. In general it is really a whodunnit rather than a whydunnit, although of course that side is eventually revealed.

That doesn't make it any less worth reading, but it does mean it is not an easy read.

Kerrie - Thanks for this review, as always. You make an interesting point about whether or not a novel stands the test of time. Sometimes, the way a novel is written is more appealing to audiences of one era than to audiences of another; I've read books like that, too. I appreciate your comments on this one.

I read another of the Alan Grant mysteries a while ago and enjoyed it a lot, but it really was dated in many ways.

Thanks for the review.

Kerrie, I found this one in our rented cottage in Scotland this summer so I have a review from July 17th if you are interested in linking to it.

I struggled to decide why I found reading the novel a bit like hard work, which is why I highlighted a literary complexity which I think a modern editor would probably "iron" out.

Dorte - thanks for pointing out your review. I've added it into my post. I think you got on better with the book than I did.