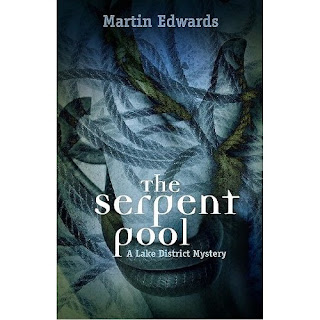 One of the unsolved crimes that always worried DCI Hannah Scarlett's former boss Ben Kind was the drowning of Bethany Friend in the Serpent Pool, a shallow lake not very far from where Hannah and her partner second hand bookseller Marc Amos now live. Bethany's death went down on the books as suicide, but Ben Kind always thought she had been murdered.

DCI Hannah Scarlett is head of Cumbria's Cold Case Review Team, but as so often happens, cold cases may have links to current ones, although these are not be obvious at first.

The shocking death of one of Marc's best customers, burned to death in a converted boathouse filled with priceless books, reveals connections between Marc and Bethany Friend, and Hannah wonders why he has never told her that he knew Bethany. The seed of mistrust, ever present in long term relationships, grows when Marc turns to an attractive colleague for solace. Just to complicate matters, Daniel Kind, Hannah's historian friend (and son of Ben) returns from overseas and gets in touch with Hannah.

THE SERPENT POOL is one of those stories is characterised by careful groundwork that then gathers breathtaking pace in the second half. I enjoyed the book very much. My rating: 4.8.

It is #4 in Edwards' Lake District Mysteries series, and while for those who have read earlier titles it is another very satisfying instalment, those who have not read earlier ones need not worry about whether they have missed too much of the backstory. I think Martin Edwards treads that fine line marvellously well. Those new to this series will find themselves hunting for the earlier titles. Among good news relayed earlier this year was that the first, COFFIN TRAIL, is being re-issued.

Links on my blog:
Martin Edwards' Blog: Do You Write Under Your Own Name

Kerrie - You have truly whetted my appetite! I've very much enjoyed Martin Edwards' other Lake District mysteries, and I'm very much looking forward to this one. Thanks for your review!

I haven't read any of Martin's books yet but do have THE COFFIN TRAIL ready and waiting near the top of Mt TBR so am looking forward to that.

Well worth it Margot. Another series to read Bernadette :-)

Oh, I thought I left a comment here yesterday???

Well, like everybody else I am really looking forward to this one. I wasn´t brave enough to try to get a review copy, though, so now I will have to wait.