Crime Fiction Alphabet: J is for James, P.D. that is

P.D. James is one of those writers who immediately spring to mind with the letter J.

I read THE LIGHTHOUSE in the days before I had a blog and so all I have is this sort of mini-review from my database. But I do know that it was among the top books I read in 2005, with a rating of 5.

Combe Island off the Cornish coast has a bloodstained history of piracy and cruelty but now, privately owned, it offers respite to over-stressed men and women in positions of high authority who require privacy and guaranteed security. But the peace of Combe is violated when one of the distinguished visitors is bizarrely murdered. 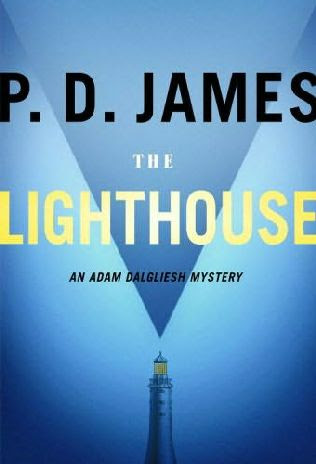 Commander Adam Dalgliesh is called in to solve the mystery quickly and discreetly, but at a difficult time for him and his depleted team. Dalgliesh is uncertain about his future with Emma Lavenham, the woman he loves; Detective Inspector Kate Miskin has her own emotional problems; and the ambitious Sergeant Francis Benton-Smith is worried about working under Kate. Hardly has the team begun to unravel the complicated motives of the suspects than there is a second brutal killing, and the whole investigation is jeopardized when Dalgliesh is faced with a danger more insidious and as potentially fatal as murder.

THE LIGHTHOUSE is a variant of the closed-room mystery. I kept thinking of it when I read Stieg Larsson's THE GIRL WITH THE DRAGON TATTOO. Agatha Christie's AND THEN THERE WERE NONE has a similar setting as has MURDER ON THE ORIENT EXPRESS. Suspects are limited by the fact that access to the island is controlled not only by the availability of transport but also the weather. The copy of THE LIGHTHOUSE that I read was map-less and I clearly remember sketching rough maps to help me understand where the island's inhabitants were living in relation to each other.

Other contributions to Crime Fiction Alphabet for the letter J can be found here.

Thanks, Kerrie, for highlighting The Lighthouse. That "closed-room" scenario is really interesting, isn't it? Christie does the same thing in Cards on the Table, and I think it adds to the intellectual challenge. : )

I'm a HUGE fan of P.D. James, and plan to also highlight her for the letter "J." (Fortunately, she has many great books from which to choose.) I haven't read THE LIGHTHOUSE yet -- I had no idea it was a locked room mystery! -- thanks to your blog it's been moved closer to the top of my stack.

I believe all of P.D. James' books very cleverly (and very plausibly) limit the number of possible suspects. I can't recall titles, but there was one that involved an enormous tree falling during a storm which cut off access to an area; only those in the area would have been able to kill the victim. I think her best use of this device was one where a serial killer was on the loose; the culprit murdered the victim in a manner similar to the serial killer's m.o. Because there were only a handful of people who knew a certain detail about the serial killer's methods, the number of suspects was very small.

She's a great writer--and I'm so glad Dahlgliesh has been allowed some happiness at last with a new wife. However, knowing James, we might see something happen to that wife in her next book!

I enjoyed The Lighthouse, of course, though I do prefer The Private Patient.

My brother loves PD James. I think he has it. I will borrow it!