Review: THE SILENCE OF THE RAIN, Luiz Alfredo Garcia-Roza 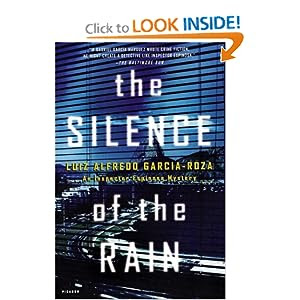 Blurb:
In a parking garage in the center of Rio de Janeiro, corporate executive Ricardo Carvalho is found dead in his car, a bullet in his head, his wallet and briefcase missing. Inspector Espinosa is called in to investigate the apparent robbery and murder, but the world-weary Espinosa knows that things are not always as they seem. Carvalho’s recently acquired one-million-dollar life insurance policy and the subsequent disappearance of his secretary Rose complicate matters—as does Espinosa’s attraction to Carvalho’s beautiful widow, one of the suspects. And when two more people turn up dead, Espinosa must speed up his investigation before anyone else becomes a casualty.

Inspector Espinosa is an interesting character, in his mid forties, a failed marriage behind him, a bit old fashioned, a book collector and reader of English classics, and to my mind at least, a touch of Inspector Clueso about him.

I'm not spilling any beans if I tell you that right from the start the reader knows what has happened in this death. But of course Inspector Espinosa does not have the advantage that we have - we were witnesses at the death scene, for a few moments at least. And so we watch Espinsosa test all sorts of hypotheses and follow false trails. We can only hope, in the words of Sir Thomas More, that when his head has finished turning, it is facing in the right direction, and that he comes to the right conclusion. It is a pity he can't feel us willing him on.

THE SILENCE OF THE RAIN has an interesting structure. In PART I we see Espinosa in the third person. In fact we enter many people's heads in the same way. In PART II Espinosa is in the first person, we actually hear how he thinks. And then in PART III, we see him "from the outside" again.
If you've read this book, how did that strike you?

THE SILENCE OF THE RAIN is the first in Garcia-Roza's Inspector Espinosa series.
I'm certainly interested in reading more, now that I've discovered him.Many thanks to Rob at The View from the Blue House who pointed the way to him in our mutual quest: the 2010 Global Reading Challenge.
It is also interesting to find out that the author was 60 years old when he wrote this first novel. Check an interview with him here. Thanks to Jose Ignacio Escribano of The Game's Afoot for pointing to this article.

Kerrie - Thanks so much for this review. The book sounds fascinating! I haven't read this Garcia-Roza, although I've read others. I find Espinosa's character really interesting and, like you, I'd be interested in reading more. In other novels I've read where there's a change of point of view like that, I've found it can be very effective if it's done well, so that the reader isn't confused.

ooh, thanks for the review, Kerrie. I am definitely going for this one in light of your recommendation, in my endless quest to cover the translated crime fiction universe!

True to my word, I have just ordered it! The PB is out of print over here but have found a 2nd hand copy of the HB. Looking forward to it.

Which one have you read Margot

I love Garcia-Roza. He's one of my favorite writers--he's one of the ones whose books I can't wait for and buy and read as soon as it comes out. Each one is a jewel.

Thanks for reviewing The Silence of the Rain and introducing Luiz Garcia-Roza to so many more people.

I'd be interested in reading more. In other novels I've read where there's a change of point of view like that, I've found it can be very effective if it's done well, so that the reader isn't confused....