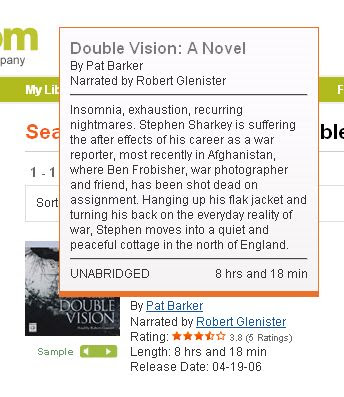 Published 2003
An audio book from Audible.com

Publisher's Blurb
Insomnia, exhaustion, recurring nightmares. Stephen Sharkey is suffering the after effects of his career as a war reporter, most recently in Afghanistan, where Ben Frobisher, war photographer and friend, has been shot dead on assignment. Hanging up his flak jacket and turning his back on the everyday reality of war, Stephen moves into a quiet and peaceful cottage in the north of England. It seems the perfect environment in which to write his book on the representations of war, one that will be based largely on Ben Frobisher's work. But Stephen's supposed isolation offers no protection from other people's suffering or the shattering effects of human brutality.

There were actually two threads in this novel: the Stephen Sharkey one detailed in the blurb, and another story in which Kate Frobisher, sculptor, widow of the dead Ben Frobisher, is central.

At the beginning of the story Kate is involved in an accident late at night on an icy road and she is severely injured when her car slams into a tree. Just before passing out she is aware of a man standing next to the car, peering in the driver's window. When she is later rescued by police and ambulance, the "watcher" is never mentioned, but Kate knows he did nothing about rescuing her.

Kate has recently been commissioned to create a large bronze statue of Christ for the local church, but she has been severely injured in the accident and has to employ someone to help her make the plaster cast for the sculpture. The local vicar finds someone for her - a man working as a gardener, who has a mysterious background.

I'm not sure why I thought this would be crime fiction. In my defence some of Pat Barker's novels are listed in crime fiction indexes. So I chose this recording on the basis of the author's name, and really should have read the blurb more carefully. The frustrating thing is that a crime is committed, but resolution is not central to the novel.

About Pat Barker:
Pat Barker was born in 1943 in Thornaby-On-Tees, Middlesbrough. She studied Economics, Politics and History, going on to teach History at a College. She left this post in 1970, when she found she was pregnant with her first child. Her first novel Union Street was published in 1982. Her second novel Blow Your House Down was published in 1984. To date she has published eleven novels and she has won seven awards for her writing, including the Fawcett Society Book Prize, Guardian Fiction Prize and the Booker Prize for Fiction.

Kerrie - Thanks for this review, as always. I've read books, too, that I thought were going to be crime fiction and turned out to be quite different. It does make me wonder, sometimes, how books are labeled by publishers and booksellers...

I think this book may have started off as crime fiction Margot - but then Barker lost sight of that in her exploration of post traumatic stress syndrome, and relationships between the main characters. There's an interesting play on the concept of "double vision" too.