Review: THE CHORISTER AT THE ABBEY, Lis Howell - Audio

THE CHORISTER AT THE ABBEY was published in 2008. 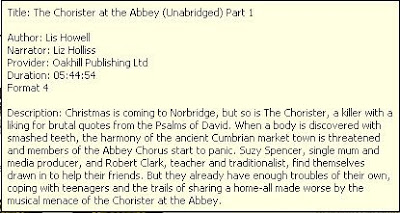 This was a cozy not quite in line with my usual reading.
In fact at times I wondered if I was listening to one of those "Christian" mysteries I've been seeing a lot of recently.
I'm generally not a "quitter", and I think that was what kept me going.
It was a murder mystery. There's a body right at the beginnning, as you can see from the blurb, and then another 3 people attacked, two of whom eventually die.

There seemed to be an underlying message: ordinary people can solve mysteries, and at times the coziness was almost overwhelming.There's a lot of human interest in the story too - the relationship between Suzy and Robert trembles on a knife edge for a while, a young chorister finds his true vocation, a teenage student causes heart ache for her parents. It is not badly written, it is just that my general fare is a bit grittier.

On the other hand, if churchgoing is part of your weekly ritual, you'll probably like THE CHORISTER a bit more than I did.

If you do decide to read it, then I think you should try to get the first in the series, THE FLOWER ARRANGER AT ALL SAINTS, as I gather from references in THE CHORISTER, that is where Suzy and Robert meet up, and solve their first mystery. It is probbaly better to read them in order.

I did try THE FLOWER ARRANGER a while ago...and it was a DNF for me. I like a good cosy but it was all a bit twee and unrealistic for me.

"underlying message: ordinary people can solve mysteries". But that's the Raison d'être for cosy mysteries. I agree some cosies can be twee and there is a whole sub-sub genre in this area. (I never understood the 'kitchen cosies' out of the USA.) I've been catching up on Kindle on some recent Simon Brett Fethering cosies and I have to admit that they are rather disappointing and getting tired. My personal belief is that six is the ideal number in a series, but I suppose successful authors are committed to produce more by their contracts, at the expense of the quality of the work.

I think the Simon Brett series is a bit patchy Brian. I have generally enjoyed them, but THE POISONING IN THE PUB (#10) was a good as any of the others - almost like he got a second wind. I haven't read #11 yet

Sounds ghastly! Overwhelming cosiness - my idea of hell. I wonder how this got a 3.9?

Well, you see, Maxine, it did some things fairly well. Just too cozy for you and me. it was well written. Stylistically nothing wrong with it. The murder mystery was there and that thread resolved quite well. It is part of a series (if 2 is a series) but can be read as a stand-alone (although you gradually become aware there must have be a preceding book), and some people will like it. One Library Thing reviewer gave it 5. As you know I rarely use the lower parts of my rating scale - this has actually got the lowest rating for this year.