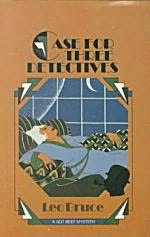 Blurb from Fantastic Fiction
CASE FOR THREE DETECTIVES (1936)
Possibly the most unusual mystery ever written. A murder is committed, behind closed doors, in bizarre circumstances. Three amateur detectives take the case: Lord Simon Plimsoll, Monsieur Amer Picon, and Monsignor Smith (in whom discerning readers will note likeness to some familiar literary figures). Each arrives at his own brilliant solution, startling in its originality, ironclad in its logic. Meanwhile Sergeant Beef sits contemptuously in the background. "But," says Sergeant Beef, "I know who done it!"

I must have enjoyed CASE FOR THREE DETECTIVES, #1 in the Sergeant Beef series, because right under that entry in my records for 1988 appears the second in the series.  CASE WITHOUT A CORPSE (1937).

Leo Bruce was a pseudonym for Rupert Croft-Cooke (1903-1979).
In the latter name he published a formidable array of books from 1933 to 1978. He also wrote a number of non-fiction titles. 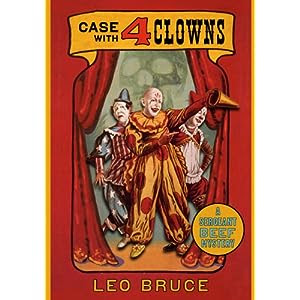 Interestingly the third title in this list CASE WITH FOUR CLOWNS is being re-published in the US in September this year. See Amazon.

Beginning in 1955 Bruce wrote another detective series:  Carolus Deene, senior history master at the Queen's School, Newminster, who acts as an amateur sleuth.This series had 23 titles in it, the last one being published in 1974, so he published more than one a year. Over the same period he published 40 novels as Rupert Croft-Cooke, so in some years he published at least 3 books a year.

Kerrie - One of the things I really like about your Forgotten Book contributions is the way they introduce me to books I haven't read yet. This is one of those times. Very interesting premise to this one...

I thought I was the only one who had those books! Here's to obscure authors (and the people who publicize them!)

I've been a fan of Leo Bruce's work for decades. It's good to see that his books are being reprinted for a new audience.

I heard about this through Patti Abbott's "Forgotten Friday." This one looks like fun. Thanks.
==========================
Detectives Beyond Borders
"Because Murder Is More Fun Away From Home"
http://www.detectivesbeyondborders.blogspot.com/