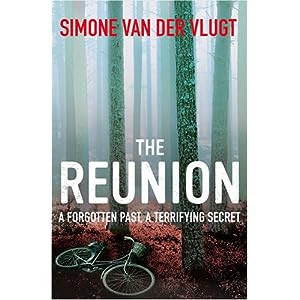 Isabel Hartman went missing on a hot day in May, nine years ago. She was riding home from school but never got there. We were fifteen.

In primary school Sabine Kroese and Isabel had been best friends, but then they had grown apart. Isabel had grown tired of Sabine and she and her friends bullied her, making Sabine's life a misery.

Now, nine years on, Sabine is working in an office in a bank in Amsterdam pulling her life together after an absence of nearly a year from work due to a nervous breakdown. Sabine's return to work does not go smoothly. She seems a lot less competent at her job than she used to be, and someone has usurped her role as acknowledged head of the office. Life there is made more bearable by the discovery that Olaf, a friend of her brother's is now working in the IT department.

Sabine can remember very little of the day that Isabel went missing, just fragments, but now bits are coming back. The fact that her old school is organising a reunion draws Sabine back to the seaside village where she was born. She has no intention of attending the reunion. Each time returns to the village a little more of her memory comes back. She is convinced that she must have seen who killed Isabel and has been repressing the memory ever since.

THE REUNION builds rather slowly, but gradually the reader comes to believe too that eventually Sabine will be able to identify the Isabel's killer. THE REUNION is thick with clues if only we could see them, but when you are told things out of context, they have significance only in hindsight. The range of possible explanations narrows down, and simultaneously it feels as if, when Sabine does remember, she will be in great danger.

The writing style feels deceptively simple, and I think that comes from the fact that until this point Van Der Vlugt had written only children's books. I particularly like this cover image, and after you've read the book, you'll understand its significance.

In the final pages of the book are some notes from the author, giving the reader a little background to the book, and then a set of questions (for discussion groups) about aspects of the story.

I'm a little puzzled by the blurb on the back which refers to Simone Van Der Vlugt as "Holland's top selling crime writer."
Investigation of her website does not support this claim, although I believe THE REUNION has sold well. Her own site claims she is "one of the Netherlands’ most important authors of historical novels for young readers."
According to Fantastic Fiction there will be a second crime fiction novel SHADOW SISTER available in English in December 2010.

Kerrie - Thanks for this review. I'd wanted to read this one after I read the other reviews you mention at the end of your post. But now I want to read it even more. Thanks for the reminder to juggle it around on my TBR list. I just wish the day were long enough to get to all of the novels on that ever-growing list...