Last week's poll asked "In the most recent murder mystery you read, did you know who the murderer was?"

I had thought that whydunnits were becoming more prevalent, but among this blog's readers, the balance is even. 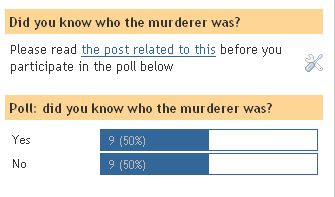 Those who left comments however described books which synched with my own recent experience of knowing right from the start who committed the crime, and then being a spectator as the investigators came to the same understanding.

Kerrie - That's interesting. I'd have thought, too, that whydunits were getting more common than whodunits. Guess I was wrong...