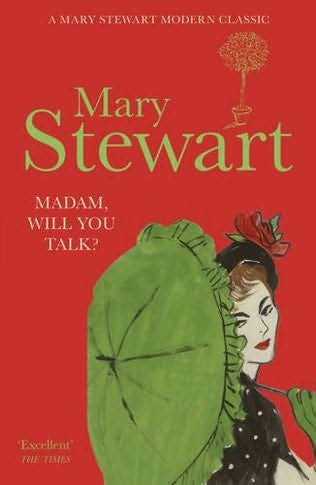 An author who crops up again and again in my little green note book is Mary Stewart (1916-).
She wrote some of those gothic romance/mystery novels that I seem to have loved so much 30+ years ago. Several of her books were adapted for film and television.

The first of her non-Merlin novels (for which you may remember her) was MADAM WILL YOU TALK? published in 1955, and then again, rather adventurously, as part of an omnibus in 1956, which included NINE COACHES WAITING, and MY BROTHER MICHAEL. (I can hear you saying: I remember them!)

I'm obliged to Wikipedia for the plot summary for MADAM WILL YOU TALK?

Charity Selborne is on holiday in Provence with her friend, and former colleague, Louise. Before her marriage to Johnny Selborne they both taught at the same school in the West Midlands. Charity is now a widow, her husband's plane was shot down in France. She is staying at the same hotel as David Shelley and his step-mother Loraine Bristol. Mrs Bristol has taken David to France from England. David's father, Richard Byron, an antique dealer, who has been accused of murder, is pursuing his son across France.

Also staying at the hotel are John Marsden who is English and reads T. S. Eliot at breakfast and Paul Véry, who is French. Both have parts to play in subsequent events.

Me - I remember Mary Stewart. I loved her Merlin books. Thanks for reminding me.

Mary Stewart is one of those authors I have been meaning to read for years, but just haven't!

Growing up, it was Mary Stewart and Phyllis Whitney and Victoria Holt -- the holy trinity of young adult female fiction. LOOOOOVED the Merlin books and Moonspinners was always a favorite.

WOw - i have read all Mary Stewart's books...
I actually thought of ehr recently - I went to a local place and they had a flagstone of
Touch Not the Cat!! One of my favourites, and loved the Name Bryony from it...
You can see where I wrote about it here:
http://fourpawsandwhiskers.blogspot.com/2009/02/romance-at-tipapa.html

Nine Coaches Waiting is a classic - I'd start with that one. Loved The Ivy Tree and This Rough Magic - she really was a master of the female suspense novel. Yes, they're dated, but still good. She's one of the authors who inspired me to become a writer.

I have read all of Mary Stewarts books have also read all of Victoria Holt, Philipa Carr, Jean Plaidy, Phyllis A Whitney, Anya Seton, Philippa Gregory and working my way through Nora Roberts :)

It's up now, Kerrie. Thanks for spotting it. I read about half of her books in my twenties. Time to go back and read one.

I read all Mary Stewart's romantic mysteries when I was in my teens, & I loved all of them. I think they are a great way of getting teenage girls interested in reading.